Life as a mama with young children can be so hard! But even when you’re overwhelmed by the trenches of toddlerhood, remember to savor these fleeting years. This season is precious! 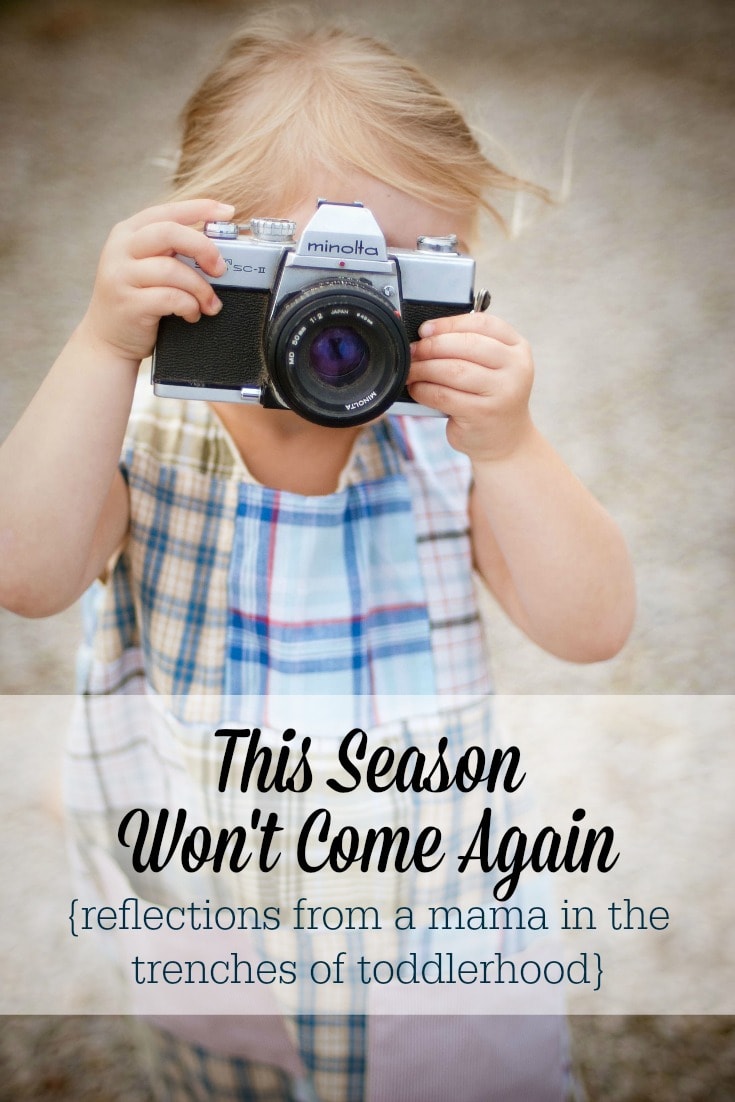 The blogging world can often look “glamorous.” So often, we bloggers put our best foot forward–and you don’t see the behind-the-scenes.

The behind-the-scenes at my house last week included: taking my baby to get tested for Hirschsprung’s Disease (a genetic birth defect of the bowels) at the children’s hospital in Charlotte (she doesn’t have it), keeping my girls home from preschool/Mother’s Morning Out on Tuesday because my oldest somehow ingested gluten and had a torn-up stomach (and I wanted to make sure it wasn’t a virus), and, being late to pick the girls up on Friday (their make-up day) because I parked in the wrong direction on the road outside the coffee shop where I was working. I walked up to my vehicle just as the police officer was about to place the ticket on the windshield. He took one look at the baby and crumpled up the ticket and helped me place her inside the van–and out of the cold.

Last week saw me tired…and feeling overweight…and often overwhelmed. It saw my husband ask me when in the world I’ll ever get a handle on the laundry–and if there would ever be a day when the dishes didn’t pile up a mile high in the sink.

I actually wrote the post below several weeks ago–and it appeared in my local newspaper as one of my columns. I wanted to share it with you all. Surely, I’m not the only mama in the “Trenches of Toddlerhood” (and “Preschoolerhood” and “Babyhood” to boot) who ever feels stressed out, overwhelmed and so tired that she forgets what it feels like to feel rested.

But in the midst of it all, my prayer is that we won’t want to rush through this season, but that the Lord will help us savor it. Because our little ones will be grown-ups one day. These 3 little babes whose diapers I change and noses I wipe will one day be women. And this season won’t come again. 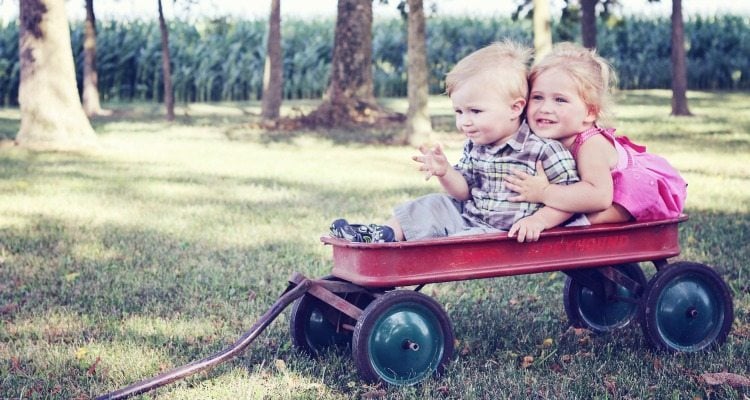 I encountered a quote from another writer the other day that stopped me in my tracks and stung my heart a little: “You will never have this day with your children again. Tomorrow, they’ll be a little older than they were today. This day is a gift. Breath and notice. Smell and touch them; study their faces and little feet and pay attention. Enjoy today, Mama; it will be over before you know it.”

I have no idea who the author–Jen Hatmaker–is, but her words ring so true.

I don’t think it hit me until my firstborn was close to a year old: Babies don’t stay babies forever.

Like now, summer had just ended and fall’s first whispers of crisp, chilly mornings were among us. And I was putting away her tiny summer bubble suits and onesies and unpacking sweaters, coats and sleepers. Holding up an outfit she had only worn once or twice, I thought to myself: “Oh well, there’s always next summer. It will get worn–eventually.”

And then it hit me: No, it wouldn’t. Because unlike me, who finished growing long ago, this little baby was just beginning.

And when the next summer rolled around, of course she couldn’t fit those little dresses. 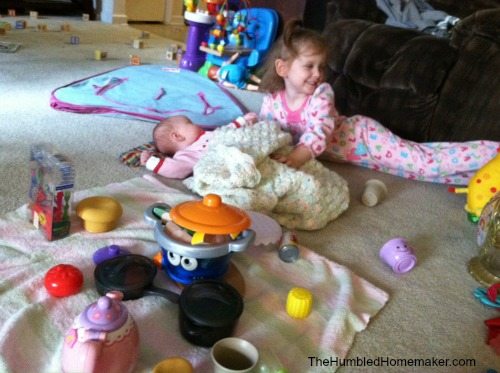 It was then that I realized this season–this season of my children’s childhoods–would never come again.

Accustomed to measuring time with the yardstick of school year to school year and season to season, I don’t think the brevity of my childhood had ever sunk in until that day.

Because, really, my childhood in the 1980s and 1990s seemed to last forever. But somehow, once I turned 18 and moved away from home to attend college, it seemed suddenly I was 28, and 10 years had passed. Oh, sure, I spent those 10 years getting a degree, living overseas, getting married, holding a couple different jobs, cultivating lots of friendships, birthing my first baby–and listening to God.

But despite all those 10 years packed, it flew by–as if in an instant.

And I turned around, and 28 was nearly 32. And that first sweet redheaded baby girl who made me a mother welcomed one baby sister—and then another. 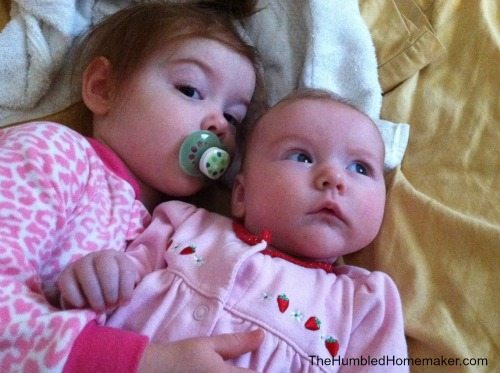 All the while, she kept on growing. The clothes? Well the clothes did get worn–by her sisters.

Instead of a lengthy childhood like I remember, my little girls are growing up before my eyes.

As my first little one is nearing 4 1/2 and edging up on the start of kindergarten next fall, I pray: “Lord, slow time down. I’m still learning how to grasp hold of this thing called motherhood.”

And God whispers: “Be still. Stop striving. Stop stressing. Take it one step at a time.”

I think of the times she’s asked me to stop writing and put together a puzzle. And I’ve told her mommy was busy and she had to wait a few minutes.

When a few minutes were up–she’d moved on to something else.

And I weep to think how quickly this “do a puzzle with me, mommy” season will pass.

Those late-night feedings that too-often make for a grouchy mommy in the morning? Let me relish the times when the house is quiet, the world is still and the only two people in it at that very moment are me and my nursing babe.

So as this fall drives on until winter beckons us, I pray I’ll take my girls on a walk to collect leaves, bake some pumpkin treats together and scribble crayon on scrap paper if they ask this non-artistic mommy to color.

How do you take time to savor this season in the trenches of toddlerhood (or babyhood or preschoolerhood or teenagerhood—or whatever current season you are in?!)? 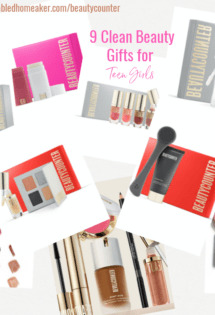 9 Clean Beauty Gifts Your Teenage Daughter Will Actually Use (and Love!) 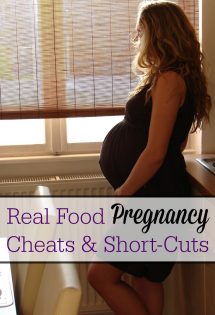 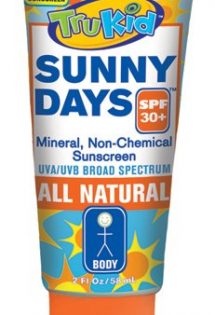