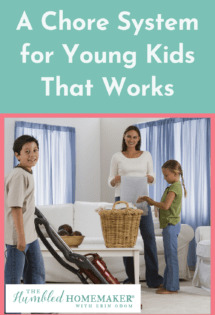 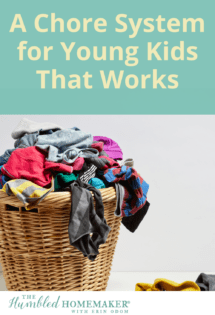 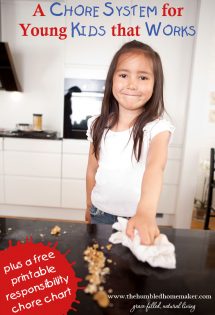 Are you confused as how to get your kids started with chores? Do you pay them or not? What is the best way to teach kids responsibility at home? We’re excited to share a chore system for young kids that works for our family! 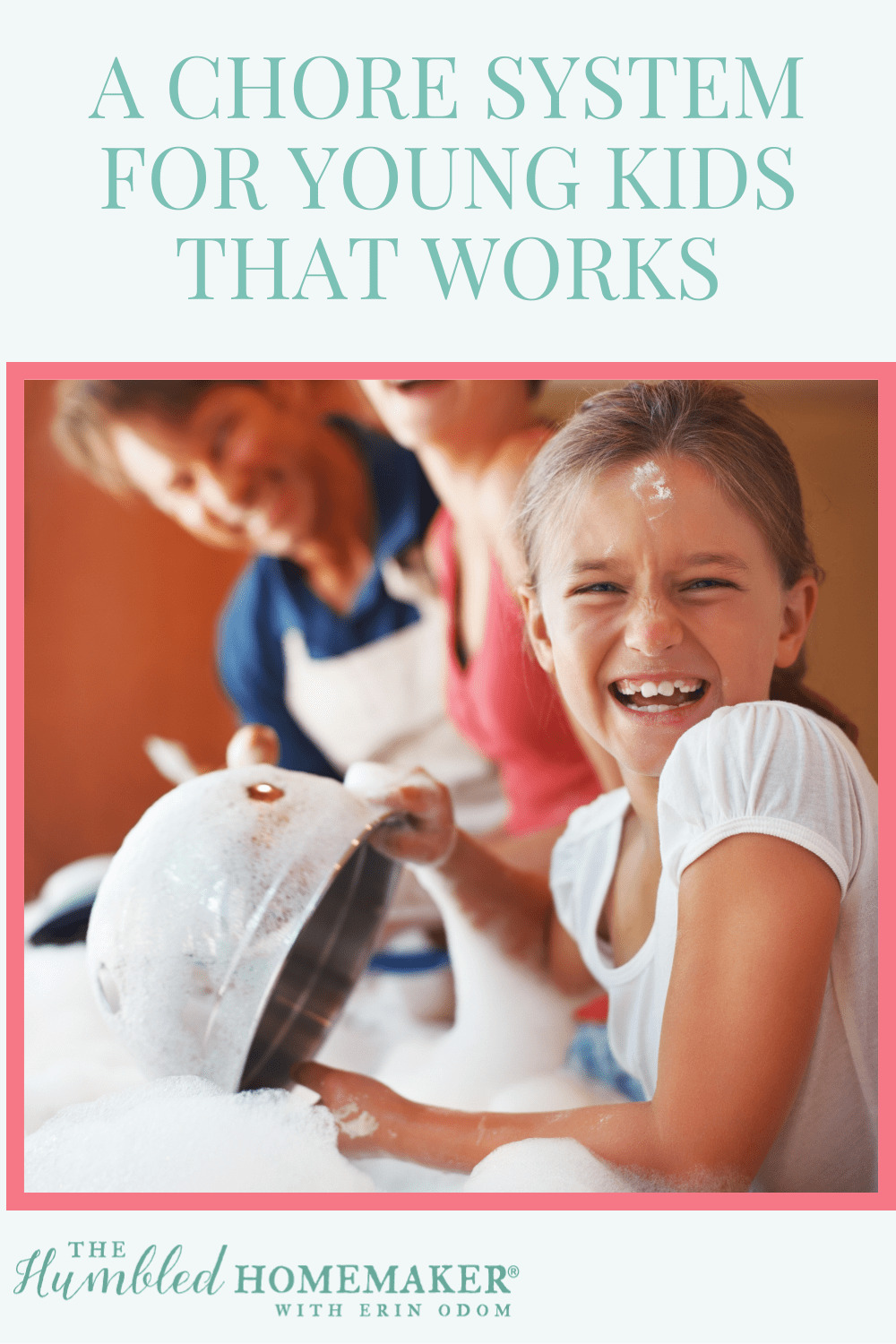 By Will and Erin Odom

Like many areas in our marriage, we were brought up differently, especially when it came to responsibilities in the home.

As a child, Will had to do chores regularly, but Erin really never had to do many, if any, chores at all.

As we started having children, we knew we wanted them to have responsibilities around the house for many reasons:

But we really had no idea what that would look like.

We tried several different systems, and nothing seemed to work well.

We had the Melissa and Doug Responsibility Chart, and it worked for a while. While we liked the idea, but it just wasn’t fitting our needs.

We began talking to other friends and discussing what they do with their children.

After several trial-and-error attempts, some good friends led us to a system that we have been implementing with success:

A Chore System for Young Kids That Works

Part of the Family – Non-paid Responsibilities

There are certain responsibilities that deal with the basic upkeep of our home that our children must complete simply because they are a part of our family.

We want them to know that we are all in this together and have to work together to make this function.

These include: tidying their room, putting away their toys, cleaning up the playroom, and doing several other things for which they do not earn money.

This creates a work ethic in them that will help them in the future.

There are other items that they do daily and throughout the week that they get paid for doing.

They don’t always like doing the work, but they are starting to understand that if they push through, they will be rewarded for their efforts.

They also need to do their chores with a happy heart and without one of us telling them over and over again to do them.

We started small, with just one paid chore, and we have added a new item each week to help them get used to it and build a routine.

We began with after-dinner clean-up.

Our oldest (age 7) started with mopping the floor. The middle (age 5) sprayed and wiped the table after dinner. Our youngest (age 3) used the handheld vacuum to clean up crumbs under the table.

The following week we added another responsibility.

Our oldest had to get drinks for everyone at dinner. The middle had to set the table. The youngest helped Mommy load the dishwasher.

We will continue adding responsibilities. Some will stay the same, while others may change from week to week.

Eventually, they may not be paid for some of these tasks as they may move into the realm of “doing it because you are part of the family.”

** Kids learning to manage money with Greenlight **
Our kids have had “give, save, spend” envelopes for a while, but we’ve been looking for other ways to help them manage their money responsibly…especially as they’ve wanted to make online purchases, chosen additional chores or made money, received monetary gifts, etc.
A friend of mine just mentioned Greenlight in passing one day when he was talking to his kids about their accounts. I asked him later what it was and how he was using it.
It’s basically a debit card for kids that parents control. Parents control the amounts and can even control how and where it’s spent. It makes it easier to teach them how to make smart financial decisions. You can give the child has little or as much control as you wish. It even has an option to turn the card on or off and keep track of how they earn money as well as spend it.
I have no idea how I didn’t know about this. I’m super excited about using this with our kids. So far, it’s been really easy and fun to use.
Get a 30 free trial and $10 by signing up with my link and using code “greenlight10” 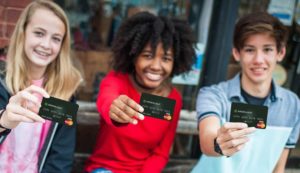 If they do these tasks every day from Monday through Saturday, they will get a set amount for each task. If they refuse to do a chore one day, then they get no payment for that item at the end of the week.

(This amount can vary per each family’s budget, but we suggest starting out with a lower number.)

To continue to develop their work ethic, they also have other items that they can chose from to earn extra. They pick the task to get whatever money is attached. They are all either $1 or $2.

Of course, this could be adjusted depending on the task or what you are comfortable with paying.

We also encourage them to approach us with ideas to earn money because we want to further their entrepreneurial spirit.

Again, some of these things will change. For example, the vacuuming could move from a paid task to a non-paid task as they get older and take on more responsibility.

It also worth mentioning that, when the kids do these tasks, they are obviously not done to perfection. The goal is to promote a work ethic in them and teach them certain skills. They are just learning and need time.

So when things are not done exactly like you think they should be, remember to be patient. Teach them how to do the job and then let them do it.

Encourage them on a job well done. If they missed something, then show them how to fix it. However, there will be times when you just need to offer praise and hit the spots they missed.

There are many ways to handle chores using charts, choice sticks or cards, etc. The key is to find a simple system that works for your family and is convenient.

If it’s too much work on your part to keep up, then it probably will not happen.

We also want to teach our children to be responsible with their money. We created save-spend-share jars for them to split their earnings into those categories.

This helps decrease entitlement issues, and they value their possessions more when they put their hard-earned money on the counter.

If they break something of theirs or ours, they will have to pay to replace it.

Also, if they lose out on an opportunity that Mom and Dad have already paid for, such as a $10 art lesson or $7 gymnastics class, they have to pay us for our lost money as well.

If they want to buy something and it’s not near their birthdays or Christmas, then they will need to use their money. This teaches them how to set goals and spend their money wisely.

We have already seen this in my oldest daughter who wants to save her money to buy a particular doll or piece of clothing. However, she used $4.00 the other day to buy a hot chocolate. Later, she realized that she now had $4 less toward her goal.

These are great discussions for us. It’s not wrong to buy the hot chocolate, but does she want that more than the doll? Did she really think it through or make an impulse buy?

That’s not to say that we don’t buy them hot chocolate or ice cream or whatever, but we want them to learn the value of saving and spending.

We want our children to learn these lessons now instead of making a thousand-dollar mistake later.

This save-spend-share system also produces more opportunities for them to give. They can buy gifts for their sisters and friends, give to our church, help other people, and add to our Operation Christmas Child Shoeboxes.

While Will made the jars for the girls, there are some other great alternatives as well. Our youngest is using the Moonjar Moneybox right now since she doesn’t earn as much.

We also really love these Give-Save-Spend Wallets from ATime4Everything on Etsy. They are so adorable and functional. Our kids actually carry theirs with them all the time.

We would also highly recommend the Financial Peace Junior Kit from Dave Ramsey. It includes a commission chart as well as a curriculum to teach your kids how to start managing money at an early age.

If you are looking for some age-appropriate chore lists, The Modest Mom Blog has a great printable list, and Money Saving Mom has a few that could be helpful:

Remember that these lists are suggestions and should be tailored to fit your child at their level.

Do you have a chore system for young kids that works in your home? How does your family handle chores? Do you pay your kids? Why or why not? 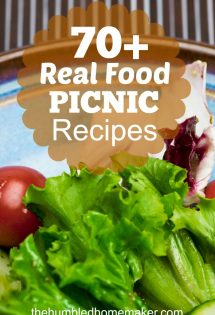 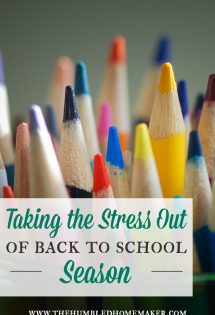 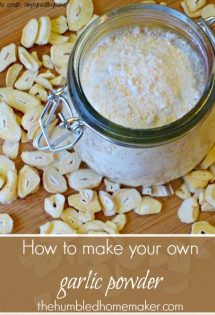