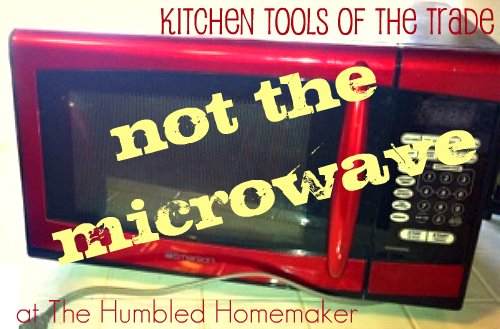 Kitchen Tools of the Trade is a weekly feature each Wednesday! Come back next Wednesday to read about a pastry mat!

My favorite thing in the kitchen is not the microwave.  When I started transitioning our family to real foods I was doing, and still am, a lot of reading.  One of those eye-openers was all those who didn’t use microwaves.

I spent close to a year in England in a flat without a microwave, so I knew I could do without it.  But that was when it was just me – not me plus hubby and three littles.  When I mentioned it to my husband, he just about flipped!  It was too soon to add one more change.

The nice thing is that when I mention something he goes off and does his own research.  There are differing opinions on the bad and the not so bad of using a microwave.  Most shocking was that Russia banned their use at one time.  It has since been lifted, but apparently the findings that led to the ban still remain.

I’d also heard my grandfather – the scientist -talk about it’s harm many times – to my secret eye rolls.  Then there is the story of a science project of two plants. One watered with stove top boiled water and the other with microwaved water.  The microwave one is dead.

When microwaves were originally marketed they were called “radar ranges.” You “nuke” your food with high-intensity radar.  It is essentially irradiating your food.

So, is it bad for you?  Well, I have found a lot of contradictions. But the fact is, I like our food better this way. Sure it is not as convenient as it used to be. But sometimes convenience leads to bad habits and bad food.

My food isn’t crisp around the edges or cold in the middle.  Most liquids get hot faster this way as well.  And reheated pizza sure is better!

My husband had no interest in hearing about one more thing I wanted to change in our kitchen.  So I waited and just tried to use it less myself.  And I cringed every time he used it, or I got lazy and used it.

A few months after I mentioned it, I heard a funny thing while at my mother-in-law’s.  “We are thinking of getting rid of our microwave,” said my husband.  Well that was the first I heard of him being on board!  A few weeks later he came home to a little toaster oven.

This was just after Thanksgiving this last year.  He spent the first few weeks being a little upset.  So, I helped out with heating things for him until we both had it figured out.  And I can say neither of us really miss it at all. 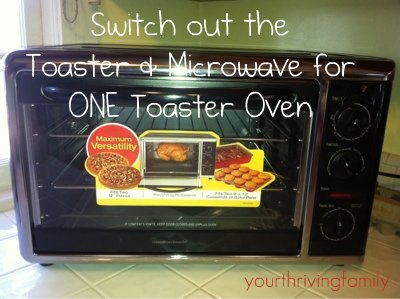 What do you NEED instead?

I use a few different things to warm up our leftovers now.  Of course the oven would work well for many things.  But I hate the idea of heating up the whole oven for a single serving at lunch.  And there are a bunch of things you can use the smaller oven for.

So I’ve traded in my microwave and toaster for a toaster oven. I like not having to heat up the oven – and the house – to cook. Last summer I did not use the oven once because it was so hot and we were trying to use the A/C as little as possible. It was hard to not bake for that long a time.

We started of with a cheap rinky-dink $10 toaster oven I found on craigslist – which honestly is probably all you need, but I wanted something I could also use in the summer instead of the regular oven, so it needed to be a little bigger. The little one is now being demoted to the workshop so i can use it to cook clay 🙂

I asked around and did a lot of research before settling on the above Counter Top Convection Oven, which I ordered from Walmart for about $70.  This one was recommended by Whole New Mom.  I have loved it.  It fits a small casserole pan, but I usually end up using a couple of tin pie plate to heat things up. 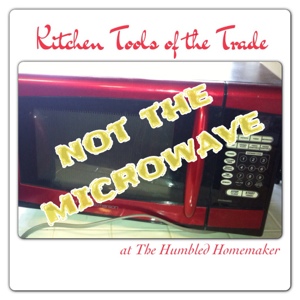 The toaster oven is great to warm solid pieces of food – pizza, casserole, burrito, lasagna etc.  I use a small sauce pan for individual servings of liquids – sauces, soups and to reheat that warm drink that always cooks too fast.  For rice or noodle dishes I use a small frying pan and keep the food moving on low heat until it’s all warm.

I also have a rice maker because I am Asian on the inside.  It has some added features, like a steamer option.  So I can put leftover rice in the bottom with a little water and place chicken, or whatever, into the steamer tray and turn it on for five minutes.

Creative Christian Mama had a post I read last year.  Of course I thought I needed to go right out and buy the butter warmer she recommended.  I refrained.  It would be much easier to pour out of a pot with a spout, but you can do without.  Though I am saving for the one next time I place an amazon order cause I am tired of funnels and messes.

Do you use a microwave?  What would get you to change to a microwave-less kitchen?

Disclaimer: This post is not intended to present scientific evidence on the dangers of microwave use. It it merely Sara’s story of why and how her family gave up using the microwave. Please do your own research.

Note from Erin: I don’t necessarily consider the microwave to be a “tool of the trade” in my kitchen, but it’s important for you all to know that we do still have one in our kitchen, and my hubby uses it. It’s not a battle I want to fight. 😉 But, perhaps I’ll ask him to read Sara’s post on it today. 😉 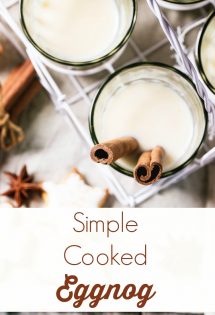 A Christ-Centered Christmas: Keeping Gift-Giving Simple
Previous Post What to Wear Postpartum {Dressing to Cover the Tummy & Diastasis}
Next Post Hope for the Christian Mother with Postpartum Depression