Reading Time: 3 minutes
His white-blond hair glistened in the sun and his sea-blue eyes danced when they saw me. The 2-year-old boy giggled as his grandmother pushed him in the swing.
I smiled at them both, pushing my 1-year-old on the swing beside him. We hadn’t been to this park much, but it was one of those rare 70-degree November afternoons, and I wanted to take advantage of such a nice day before fall fell into winter.
“Mama!” Those little eyes could have burned a hole in me. “I wuv (love) Mama!”
At first, I thought he must be meaning that I was my daughter’s “mama.” But he pointed a chubby finger right at me. “I wuv (love) you, Mama.”
His grandmother laughed. “That’s not your mama, silly! Your mama doesn’t live here!”
But he continued. Over and over again. He called me “Mama.” He told me he “loved me.”
I continued to push my daughter. His grandmother shook her head.
“His mama gave him up,” she said. “Three weeks ago. I had to drive nine hours to get him.”
My heart sunk. The boy missed his mama. How could he not? And here he saw another mama at the park with her two children – one just a little older and one just a little younger than he.
But it was what his grandmother said next that struck me the most.
“You look just like her,” she said. “You look just like his mama.”
So that was it. This blond-headed, blue-eyed boy is looking at this thrown-together, make-up-less redheaded blue-eyed mama thinking she is his.
To be honest, the next few seconds were slightly awkward. I must confess: I’m not a natural with little kids. Give me someone to interview and a story to write, and I’m in my comfort zone.
Tell me to comfort a child who’s not my own, and I’m at a loss. I don’t want to come across too strong. And I didn’t want to hurt him even more.
I continued pushing my baby, thinking: This poor child’s mother has abandoned him. And here I look just like her. And here I’m pushing another baby right here in front of him.
My 3-year-old decided to run to the other side of the park. I had to go. I couldn’t leave her alone. I waved goodbye to the grandmother and her sweet grandson.
Should I touch him? Should I say I love him back?
My inward battle ensued.
“I wuv (love) you, Mama!” he shouted.
I held my baby and watched my little girl slide down the slides, and up walked the grandmother and the boy. He continued to call me “mama.”
But we had an appointment.
I don’t want him to think he’s being abandoned … again. Oh God, what do I do?
I looked at the grandmother.
“It was nice to meet you today, ma’am,” I choked out. “I will … pray … for your grandson.”

And then I just did it. Awkward as I am around kids that aren’t my own, I did it. I walked right up to him. “I wuv (love) Mama!” he continued.

I threw my arms around him. “I love you, too. I’m SO glad I got to see you today.”
He smiled. To his knowledge, his mama had just hugged him and reciprocated his love. Part of me wished I had gotten the grandmother’s phone number.
Part of me is just praying his real mama will realize what she’s done and give him the love he so needs.
I crawled out of my comfort zone in a God-ordained day at the park.
This first appeared in my column in The Mooresville Weekly newspaper. 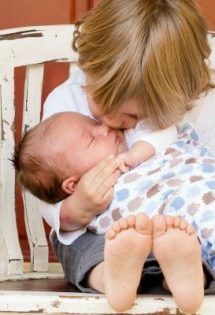 Dear Mom of a Baby and a Toddler 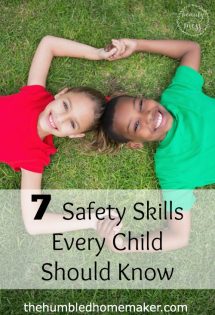 7 Safety Skills Every Child Should Know