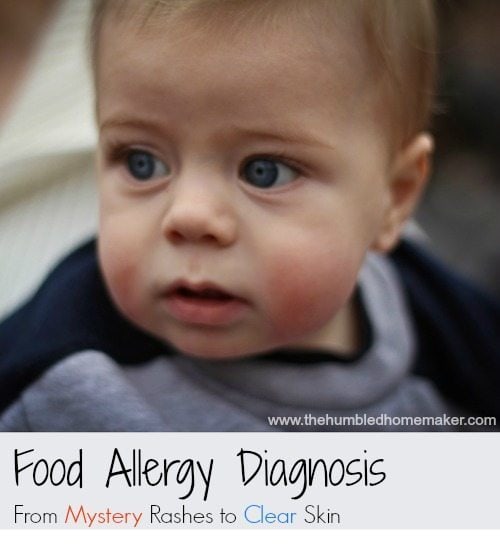 This post is part 1 of a 2-part series! Be sure to come back tomorrow for 7 Things I Learned About Food Allergies.

In November of 2011, I was at my wit’s end with my baby’s ever-worsening skin problems. At 8 months, he was delightfully chubby, but he had suffered from eczema almost since birth. He suffered a severe case of cradle cap, random rashes on his face, and eventually scratched behind his little knees so much that he bled.

I tried everything I could think of to ease his skin problems.

I switched to cloth diapers. I used only hypoallergenic skin care and laundry products for him. I spent a fortune on special creams. I made my own lotions.

The doctor prescribed steroid creams which helped temporarily but couldn’t be used on his face. I could not imagine what was irritating his skin so severely.

In desperation, I decided to try a gluten-free, dairy-free diet.

I read that dairy and gluten could be triggers for eczema so eliminating them might bring relief. He was breastfeeding at that point with a little homemade baby food. I would have to be the one to give up the gluten and the dairy. I thought it would be one of the hardest things I’d ever stuck to. Little did I know that these two foods would be just the tip of the iceberg!

Two weeks later, and he was no better.

In fact, he seemed worse. His chin became red and raw and oozed in places. His rashes would come and go, but they never disappeared completely. Amazingly, through all this he was still a pretty cheerful kid, but I didn’t have the answers we needed.

Finally, our pediatrician recommended we see an allergist.

I had always thought food allergies caused breathing problems, not skin ones, so I had never really considered food as the culprit (aside from my unsuccessful elimination trial). How could my baby have food allergies when my diet was so healthy? I was completely freaked out by the possibility of skin prick testing for my baby, but I agreed to give it a try.

My son had raging positives to 3 foods: wheat, corn, peanut. No wonder the elimination diet hadn’t helped! I left that appointment reeling from the shock. Suddenly I had to keep an Epipen with us at all times in case my baby should go into anaphylactic shock. At least I had some answers. And the doctor assured me he (and I) could eat anything else.

His skin cleared up almost immediately. Not even thirty-six hours later, he looked like a different kid. Thank you, Jesus! The itching was almost gone and his red face looked normal again. Hope was in sight!

However, we weren’t done yet…

Don’t miss the conclusion of Sarah’s story in tomorrow’s post!

Have you discovered food allergies with any of your kids? What led you to that diagnosis? 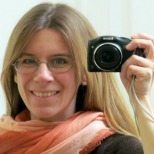 Sarah Mueller is a wife and homeschool mom to 4 boys. She writes at Early Bird Mom about how you can afford a healthy lifestyle while living beneath your means. 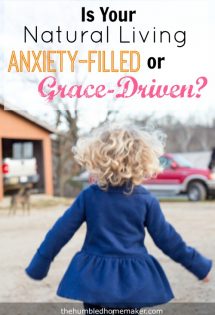 Is Your Natural Living Anxiety-Filled or Grace-Driven? 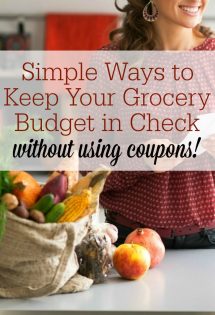 Simple Ways to Keep Your Grocery Budget In Check