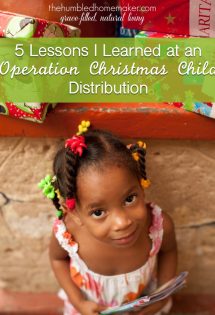 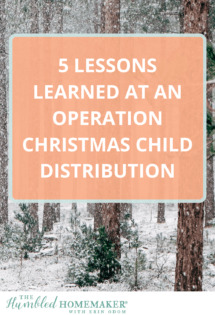 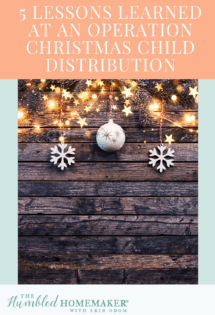 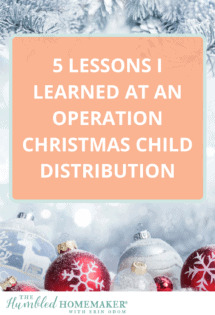 Our family was able to participate in an Operation Christmas Child distribution last week in Costa Rica. Yes, they distribute the boxes year-round! Here are some lessons I learned from participating in the distribution. 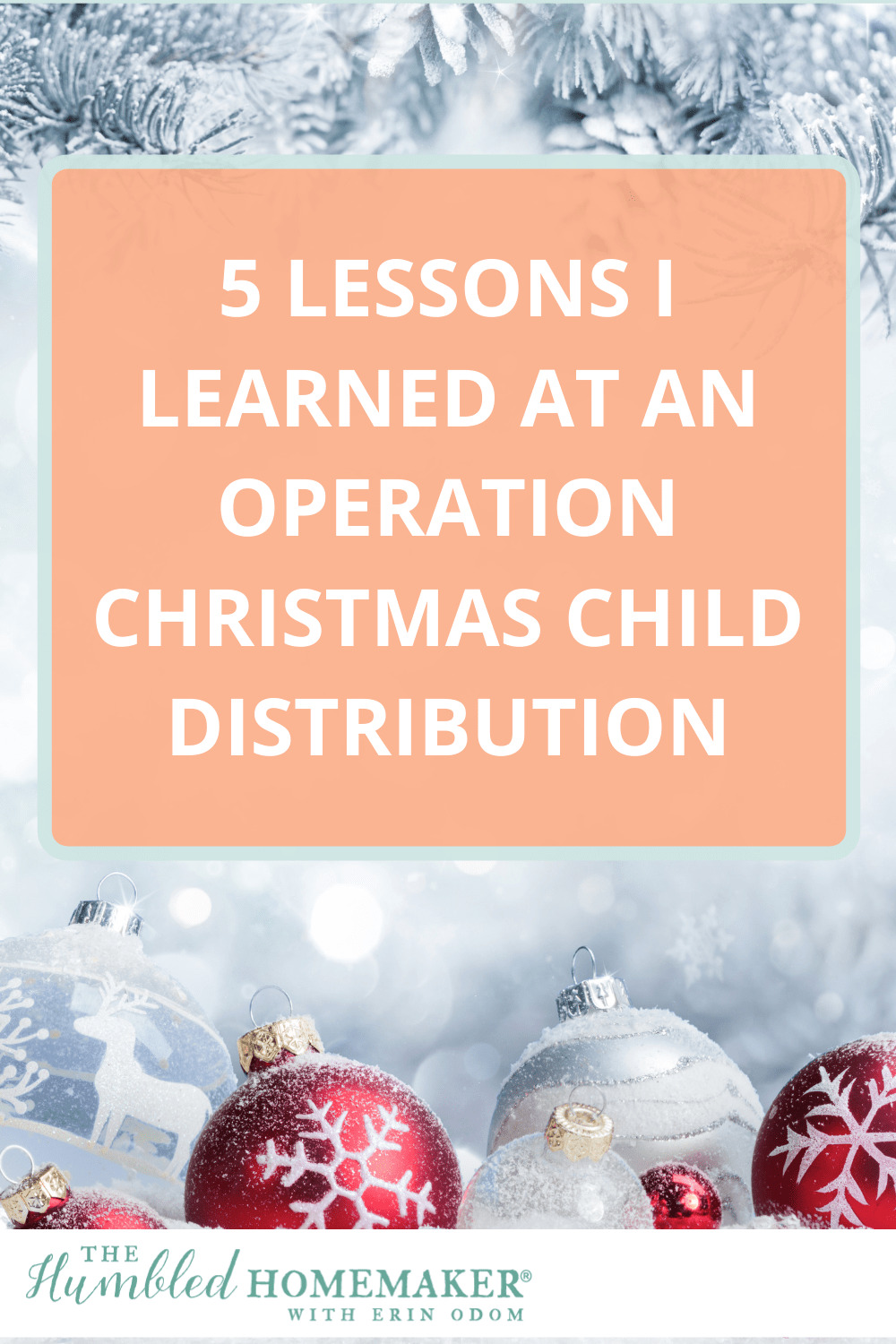 Last week, our family had the amazing opportunity to participate in an Operation Christmas Child shoebox distribution in Cartago, Costa Rica!

We have been packing Operation Christmas Child shoeboxes for years. We started the tradition before we had kids, and once our firstborn was around two, we had her join us in picking out items and helping to pack them.

When we told our girls that we were invited to participate in the distribution, they immediately knew what we were talking about because they remembered how we pack the boxes each year. They were excited to see children receive boxes similar to the ones they pack!

After the distribution, I was able to sit down with the Costa Rican coordinators of the program and ask some questions about how those in the U.S. and Canada can better pack boxes and serve the children receiving these boxes even better. 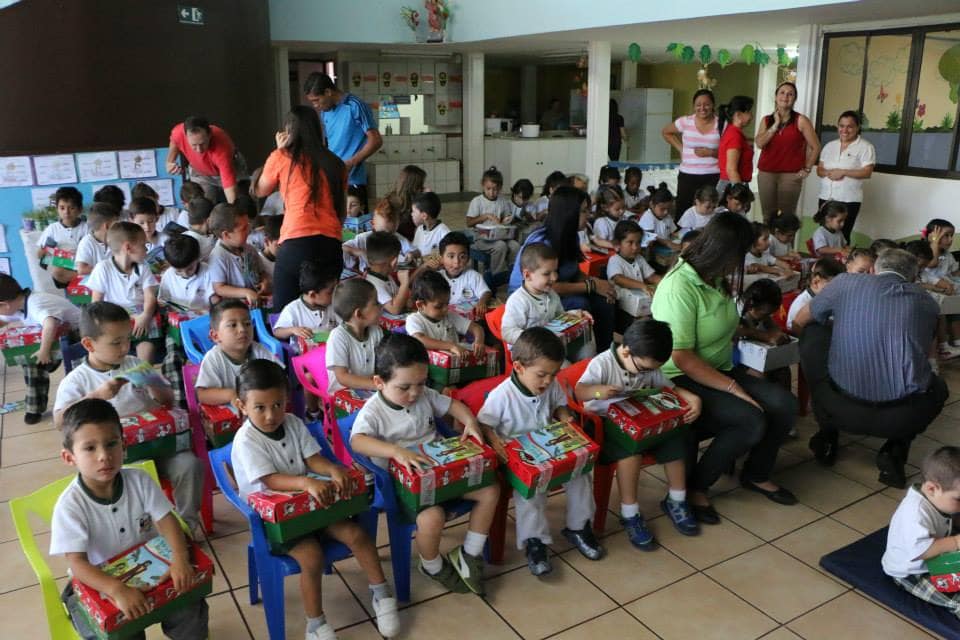 Operation Christmas Child provides free cardboard boxes that anyone can use to pack. They have also introduced their own plastic version that can be purchased on their website or at Hobby Lobby. These plastic boxes have been tested to withstand the rough shipping process as well as the drastic changes in temperature that can occur.

You can also find boxes at local big box stores. The most basic ones cost around $1 or so, but these may not hold up while shipping. You can find some sturdier ones for under $3 or use the ones from OCC.

The box itself then becomes an additional resource that the family can use for storage, etc.

Operation Christmas Child will put tape around each box to ensure it stays closed. 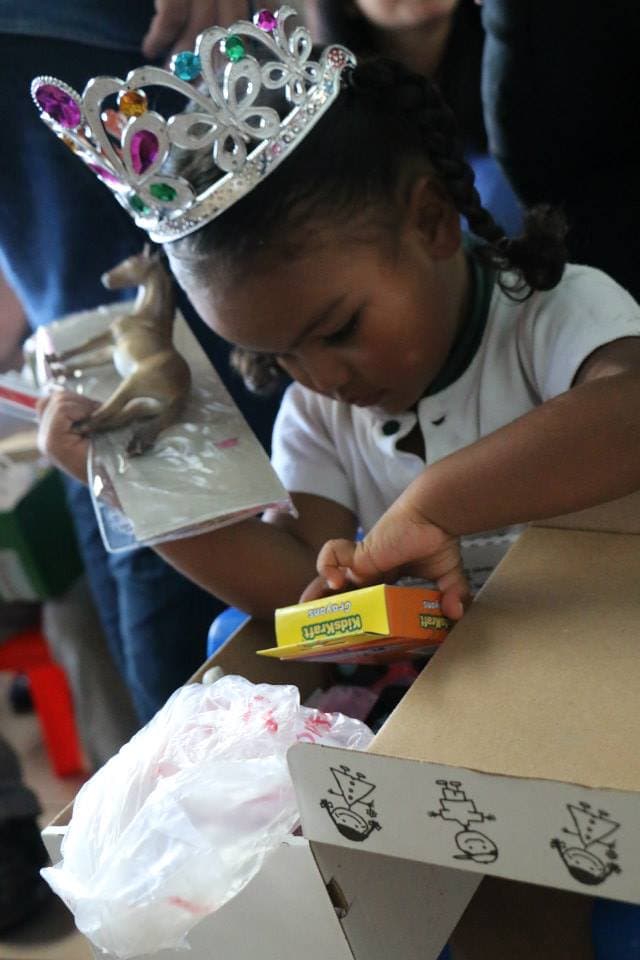 Even though our family has chosen girls to provide boxes to each year (in the ages of our own three girls), I don’t think we have ever packed a plastic princess crown.

We distributed boxes for ages 2-4 and 5-9. Several of the little girls in these age groups received crowns, and they put them on immediately!

One of the coordinators told me that many of these children come from very poor families, and princess attire makes them feel like they really are princesses. 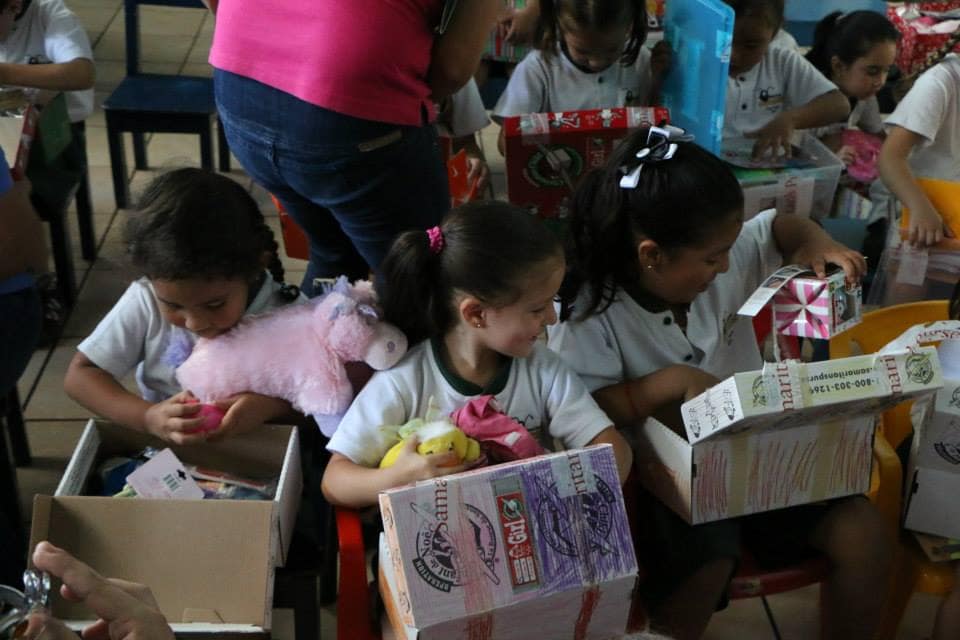 3. Candy can do more harm than good.

Candy is not allowed anymore with Operation Christmas Child. It’s not something that those in Costa Rica, at least, feel is very beneficial to the children.

For one, it can cause cavities, but, even more than that, in warm climates like in those countries in Latin America and much of the rest of the world, candy attracts bugs, mice, cockroaches, etc.

In addition, even though the boxes are donated in mid-late November, many times the children do not receive them until months later. One little girl opened up a box that had melted caramel candies all over the rest of the box’s contents. 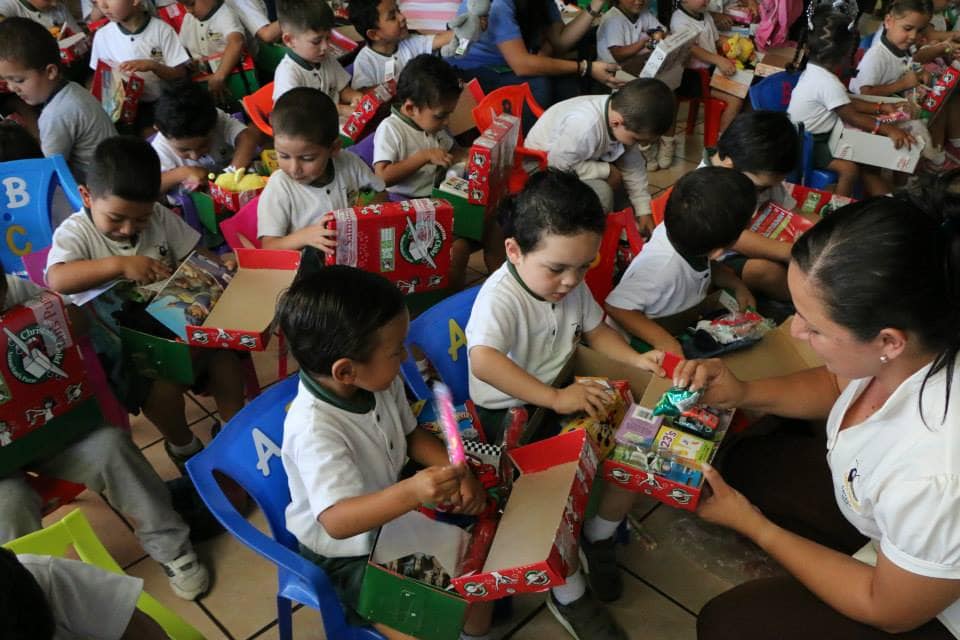 4. Each box should include items you would want your children or grandchildren to receive.

I could tell that some boxes were just thrown together with things that looked like they came out of junk drawers. And while some boxes were brimming with amazing toys, school supplies, and toiletry items, others did not include much at all.

I honestly felt sorry for the kids who did not get very much while the children on either side went home with enough for several kids! 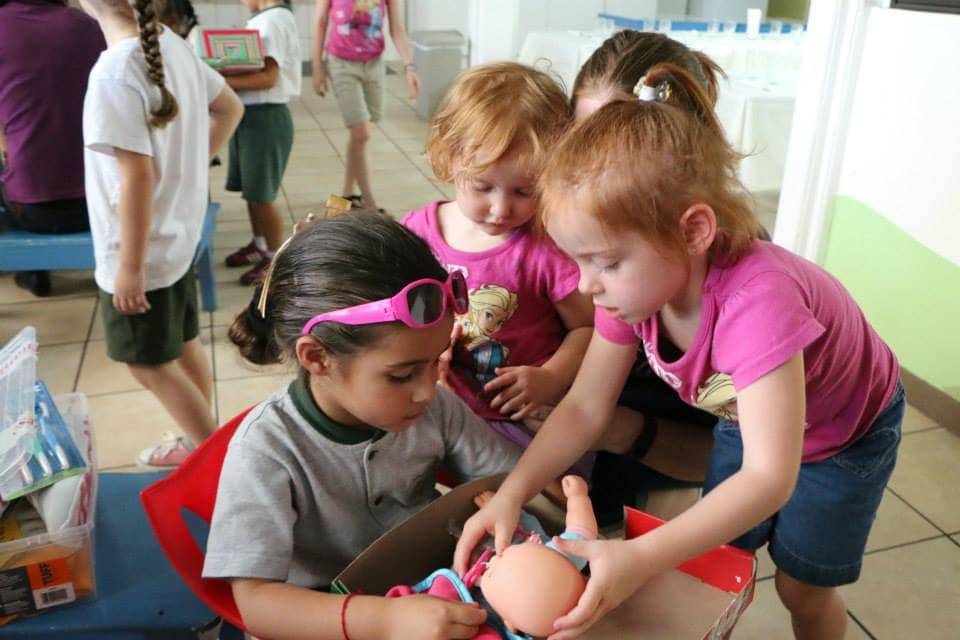 Things I saw in the boxes that were GREAT:

Here is a current list of items NOT to include:

* As of 2017, all types of toothpaste, tooth powder, baking soda, and/or pre-pasted toothbrushes are officially inappropriate items in the U.S. Due to increasing customs regulations, all items with an expiration date have become items of regulatory issue, often causing complications with the delivery of shoebox gifts…We encourage you to consider included a toothbrush, as this item will not cause problems with customs regulations, and a child’s oral hygiene can still be improved through regular use of a toothbrush alone. 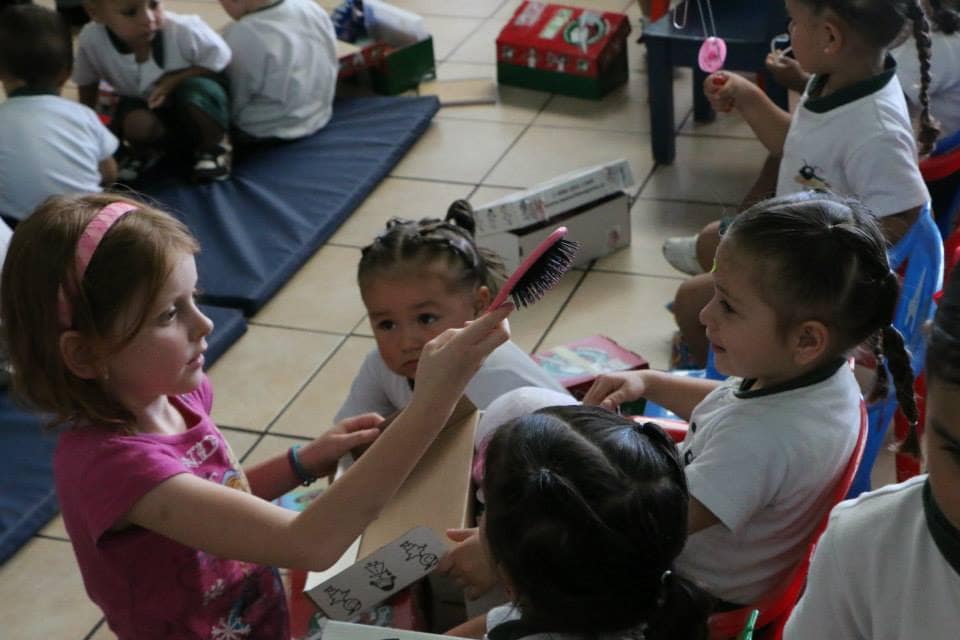 All that said, the coordinators of the Costa Rican program pointed to the fact that God is sovereign.

I had expressed that I felt sorry for a little girl who received a pair of shoes and not much else. The shoes were way too big for her feet, and it will take years for her to grow into them. The children on either side received baby dolls, pony toys, and more.

The coordinator reminded me that God is sovereign, and even though this little girl’s box did not appear to be much, perhaps He has a greater plan for it and the shoes that came in it. Maybe she has an older sister who needs a new pair of shoes. 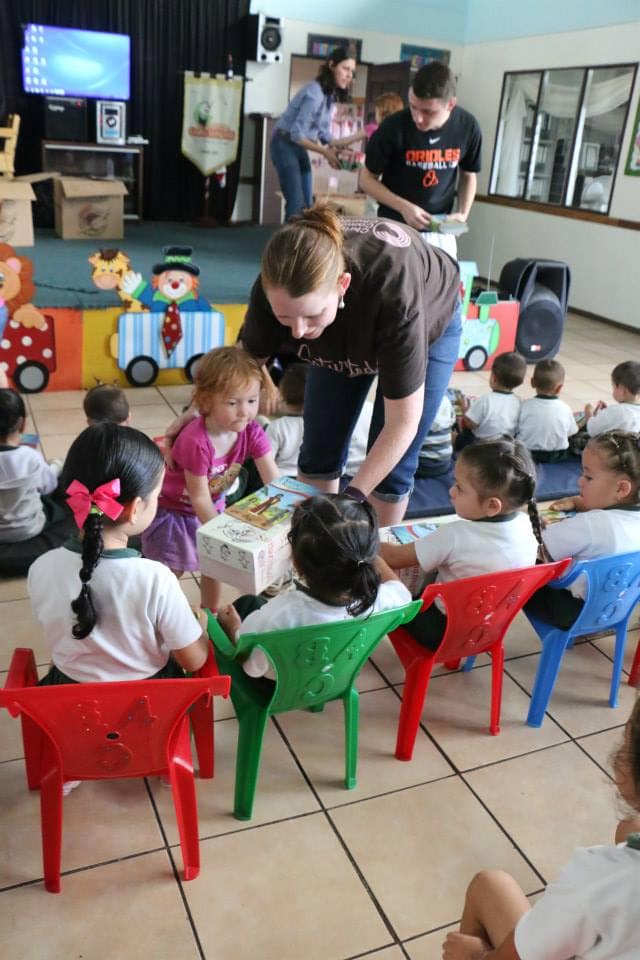 5. The gospel is really shared at the distribution.

Each box comes with a little booklet that explains the gospel to the children in their own language.

I am not sure how it works at other distributions, but at the one in Costa Rica, the coordinators also presented the gospel via some music, music videos, and a short message before giving out the boxes.

Operation Christmas Child shoeboxes really do make the children smile! I know we will continue to pack them each year.

Has your family ever participated in Operation Christmas Child?

How a Simple Shoebox Changes Lives

The Downward Spiral to Frump 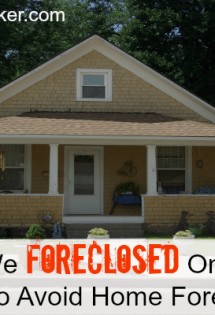 That Time the Bank Foreclosed on Our House 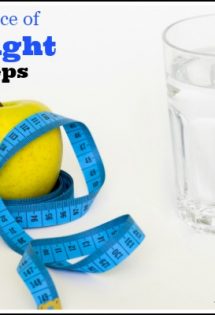