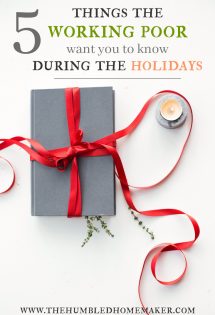 The working poor want you to know some things during the holidays–but they won’t come right out and say them. Here are some ways to better understand–and help–the working poor. 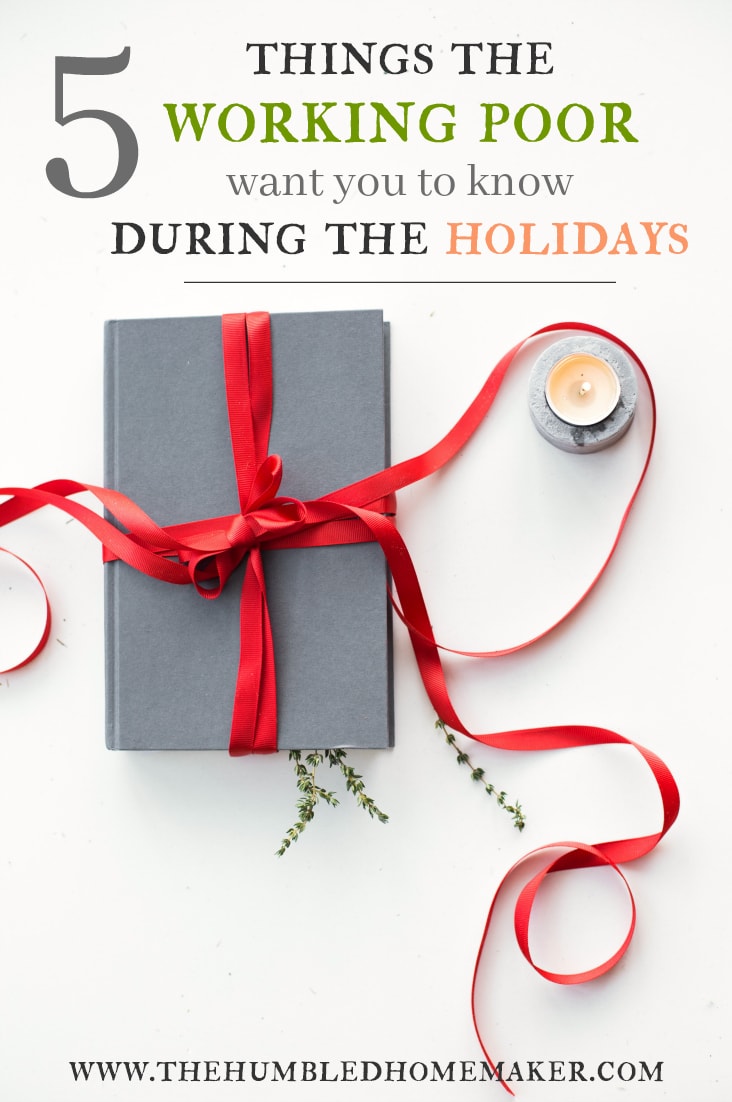 I’ll never forget the Christmas that Will and I discovered we were among the working poor.

Frustrated by our financial situation at the time, Will had walked out of a financial planning class we were taking at church.

Our teachers, an older, retired couple, volunteered to come to our home the next Sunday afternoon and pore over our finances to help us come up with a plan.

While our two toddler girls played beside our already-decorated tree that early December day, we spread all of our financial statements across our kitchen table.

After musing over our finances for several minutes, our teacher, Randy, took off his glasses, rubbed his forehead, and placed our bank statement back on the table.

“Well, one thing is clear,” he smiled. “You don’t have a spending problem.”

“We don’t?” I was shocked. I was sure we must be doing something wrong to be experiencing so much stress. Wasn’t there some area of our budget we could cut to allow for a little breathing room? But here was Randy, a financial expert, telling us we were doing everything right.

“What you have,” Randy continued, “is an income problem. You simply don’t have enough money to live.”

We were the working poor.

I’d never heard of the term “working poor” until then, but millions of Americans exist like this. They are working, but they aren’t making enough money to pull themselves out of poverty.

This results in their debts going unpaid, and in the worst cases, their children going hungry.

Whether you are working poor yourself or have never heard this description of this often-hidden subset of society until now, know that the working poor are everywhere.

Suburbia is filled with people who are barely making ends meet, and this is what they want you to know: 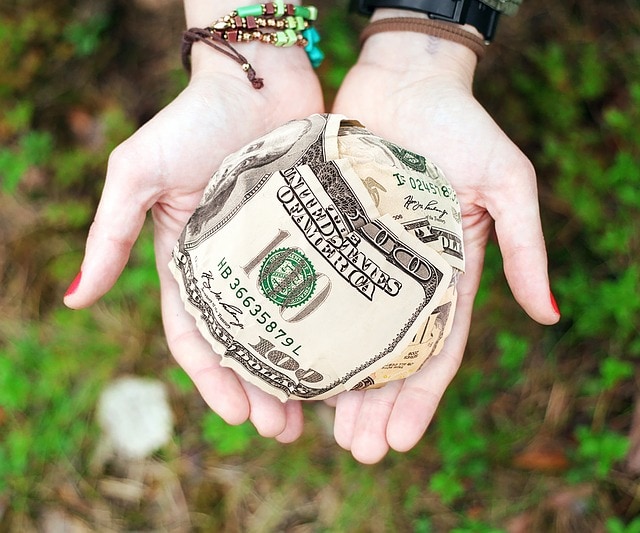 1. They don’t want to ask for charity.

The working need your charity, but the last thing they want to do is ask for it.

Most likely, the working poor are people with whom you rub shoulders on a daily basis–at your church, at our child’s school, in the doctor’s office, at the store.

It might be the mom you sat next to at your child’s basketball game or served with in the church nursery last Sunday.

The last thing the working poor want to do is ask those whom they see on a weekly basis for help.

They prefer that you give anonymously–or in a non fanfare way. Don’t make a big deal out of your giving, but do so nonchalantly or secretly.

Be observant. Notice the single mom or the family living on a teacher or public service worker’s salary? They most likely need help.

Leave food or toys on their doorstep. Don’t go when they are home. Just leave things with a note.

We had people do this for us, and it took the embarrassment out of us having to ask for help when we needed it. 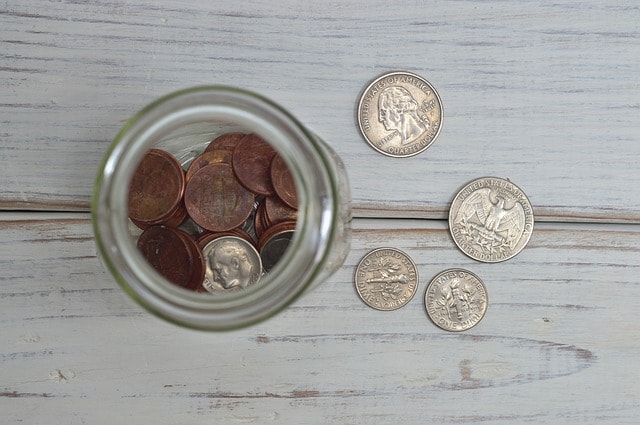 2. They can’t afford to donate.

One struggle for the working poor is that most people don’t know they are struggling financially. Since they are, in a way, “hidden” in society, they often feel the expectation from others to give generously during the holidays.

The problem is–they don’t have much (if anything) to give.

I began thinking about this a few months ago when I was bombarded with gift giving opportunities and had to choose which ones to support–and which ones to leave for someone else to contribute to.

In the course of a few weeks, we had a snack drive for a backpack ministry at our church, a call for Operation Christmas Child shoeboxes, another food drive for Thanksgiving sacks (including a $25 gift card to a grocery store), a fundraiser to support artisans in developing countries, and a request to donate a slow cooker full of spaghetti sauce for a dinner in a low-income neighborhood.

None of these were over-the-top on their own, but even a donation of just a few dollars (and especially upwards of $25+) can break the working poor’s budget.

The working poor have, literally, no wiggle room.

If you feel frustrated that it seems like you are the “only family” that gives to every cause your church, child’s school, or community requests of you each holiday season–while your fellow church member gives nothing to very little–remember this:

The working poor might not have anything else left to give.

Instead of resenting that others around you “aren’t giving” like you think they should be, trust that you don’t know the full picture.

Are those other church members being selfish or lazy? Perhaps. But if you’re giving out of a pure heart and not out of obligation, then it shouldn’t matter what others do.

Give to others with a cheerful heart and without looking around at what others are doing.

Give as you can afford and feel led. Realize that others might not have the same resources (or even calling) as you do.

Besides the working poor, there might be others that are “debt poor” or “house poor.” These families might have jobs that provide good incomes, but they might be drowning in debt or have a big house note (which is not an easily resolved problem either: it takes time and money to refinance or sell a home).

If someone says they can’t afford to give, trust that they really can’t. Don’t pressure them to give if they say no.

And if you’re reading this and you are the working poor (or struggling financially in some way), realize that you can only give what you have.

Yes, give sacrificially, but that does not mean you have to go into debt in order to give. As well, realize that you can give of your time (although if you are working several jobs just to make ends meet, I realize that can be limited as well!)

Don’t feel pressure to give just to keep up with appearances. It’s ok to say “no” to some causes. None of us can give to it all. 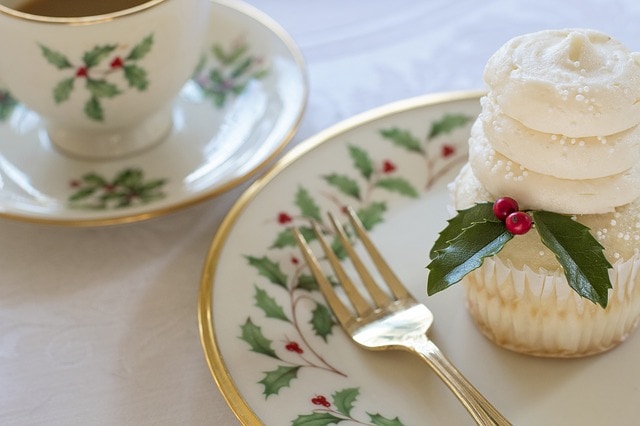 3. They’re not snubbing your party invite.

When we were the working poor, party invitations were exciting but stressful. Why?

When faced with what to take to a party, I had to really think about it. I couldn’t just pick up an extra pack of cookies at the supermarket–and bringing a pricey side dish or meat to a party was simply impossible at times.

Sometimes, the working poor might turn down a party invitation because they simply can’t afford to bring anything.

This is especially true for direct sales parties when they feel rude to attend when they know they can’t afford to purchase anything.

But it’s also true for some holiday parties where they know they don’t have enough money to contribute any food or presents for even small gift exchanges.

If a guest turns down your potluck party invitation, tell them that they can come without bringing anything.

Don’t say “if you can’t afford” (or even assume that, although it might be the case), but just say something like: “I know time is limited and the holidays are crazy. We would love for you to drop in even if you can’t bring anything. I know we will have more than enough food!”

If someone turns down your gift exchange or direct sales party invitation, do not pressure them to come. 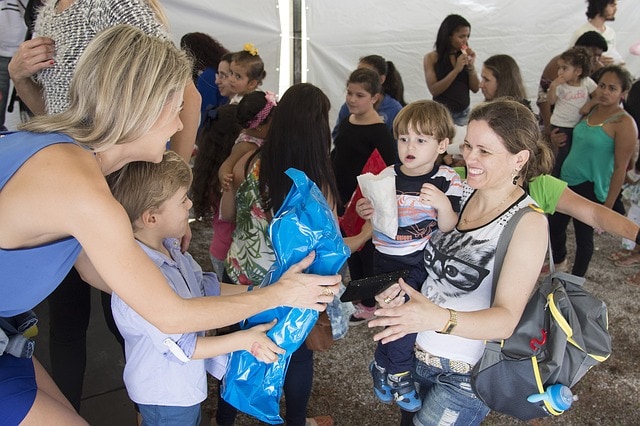 The working poor (or those who are debt poor or house poor) can so easily blend in with society because sometimes they have things or do things that require money.

For example, when were working poor, we were borrowing my parents mini van until we could slowly pay them for it. A mini van takes money to purchase, right? But no one knew it wasn’t our vehicle or that we didn’t own it outright.

We had a decent artificial Christmas tree because we had purchased it before the economic crash, when our income level was more stable.

As well, the working poor might have friends and relatives that have gifted them things–like cell phones or manicures or video games.

When we were the working poor, some wealthy friends of our sent us on a trip to Great Wolf Lodge. We could have never dreamed of paying for that trip on our own.

It’s easy to say: “Well, if they can afford that, then they should be able to afford food.”

But it’s not always the case.

We never know how people acquire things or what their bank accounts look like. And it’s not our place to assume or judge.

If people don’t look poor, it doesn’t mean that they aren’t struggling financially.

Don’t make assumptions. If someone says they are struggling financially, they probably are. 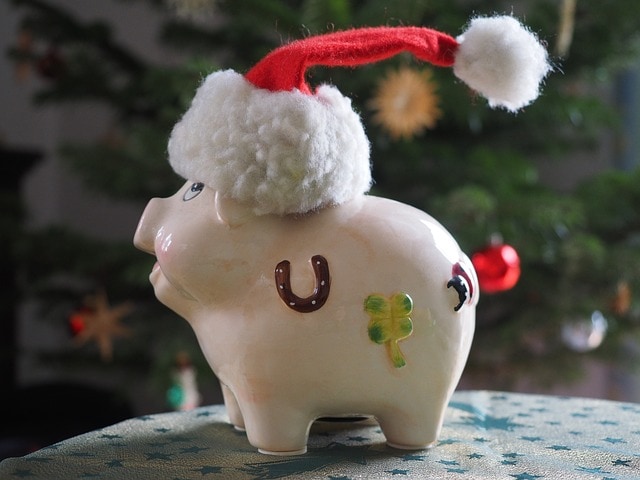 5. The consumerism is just too much.

And the more expensive and flashy the better, right?

That is what our culture would have us believe.

But the working poor long for simplicity.

They can’t afford the expensive and flashy for their families, but everywhere they go (because they are, again, everywhere you are–your churches, schools, stores, etc.), they are bombarded with it.

Do your part to deny our high consumerism culture.

Cultivate a simple Christmas of your own–with the hopes that spending less on your own family will give you the means to give more to both the working poor and others who are in even greater need. 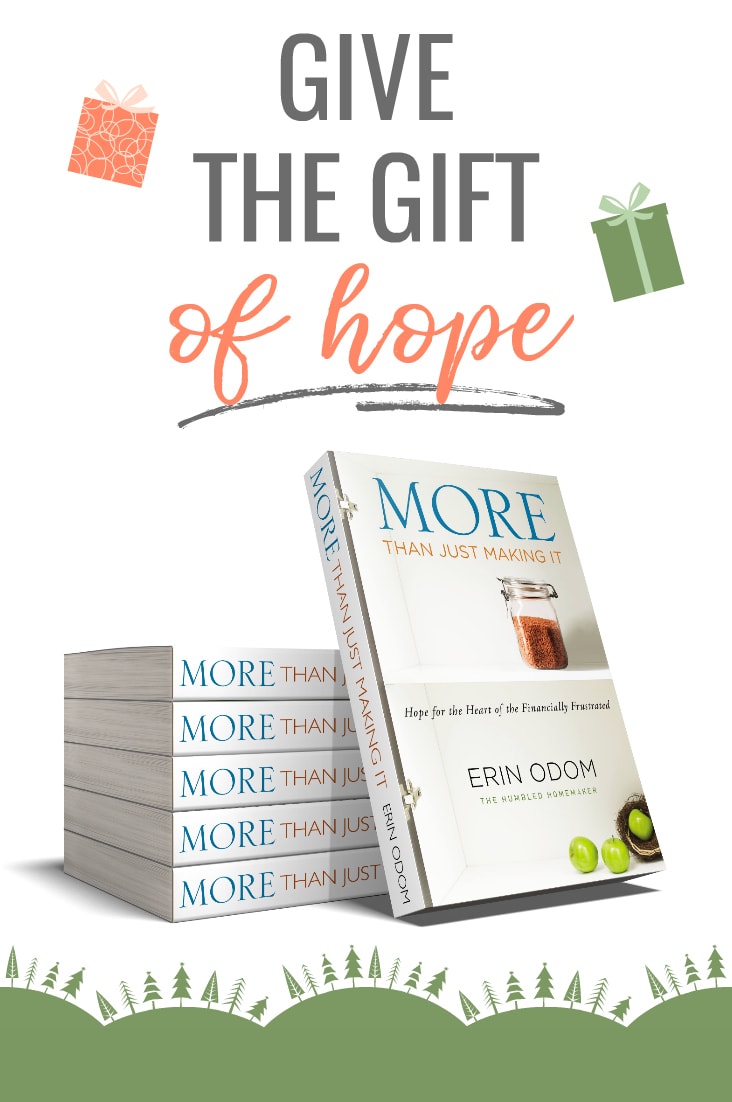 If you want to encourage your loved ones who might be struggling financially–or if you want to better understand what it’s like to live as one of the working poor–I encourage you to purchase my book More Than Just Making It .  More Than Just Making It is my family’s story of how we went from barely surviving to more than just making it financially. I wove this memoir with financial advice throughout–for those on any income level.

An easy read that packs both an emotional and practical punch, More Than Just Making It is a gift that will bless both you and your friends for many years to come. 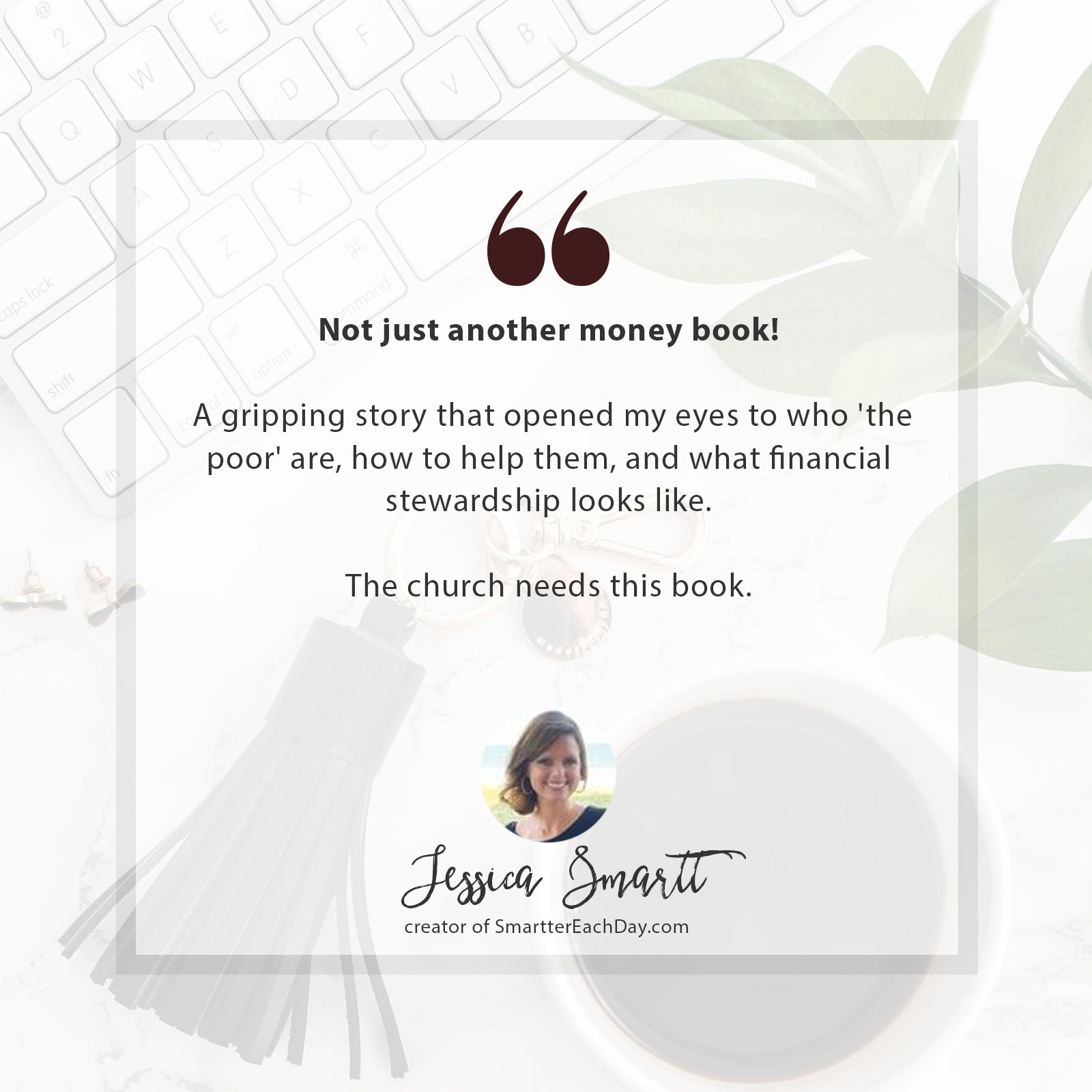 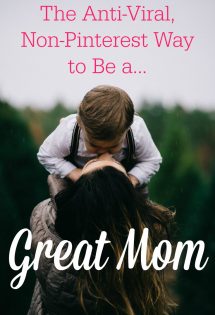 The Anti-Viral, Non-Pinterest Way to Be a Great Mom 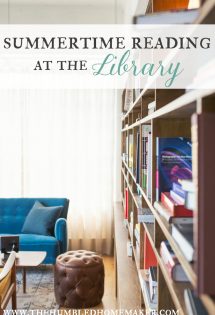 Summertime Reading at the Library 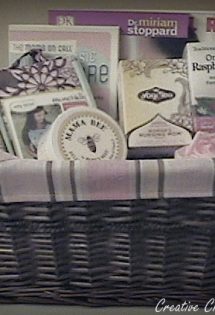