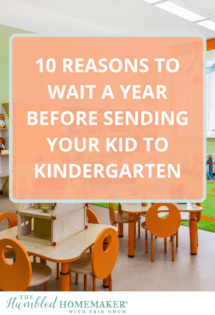 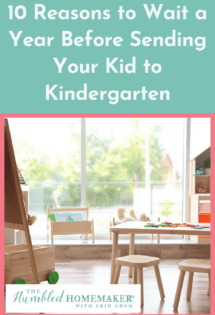 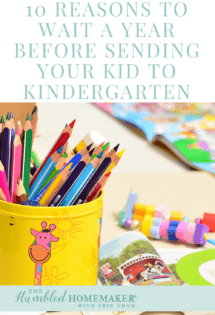 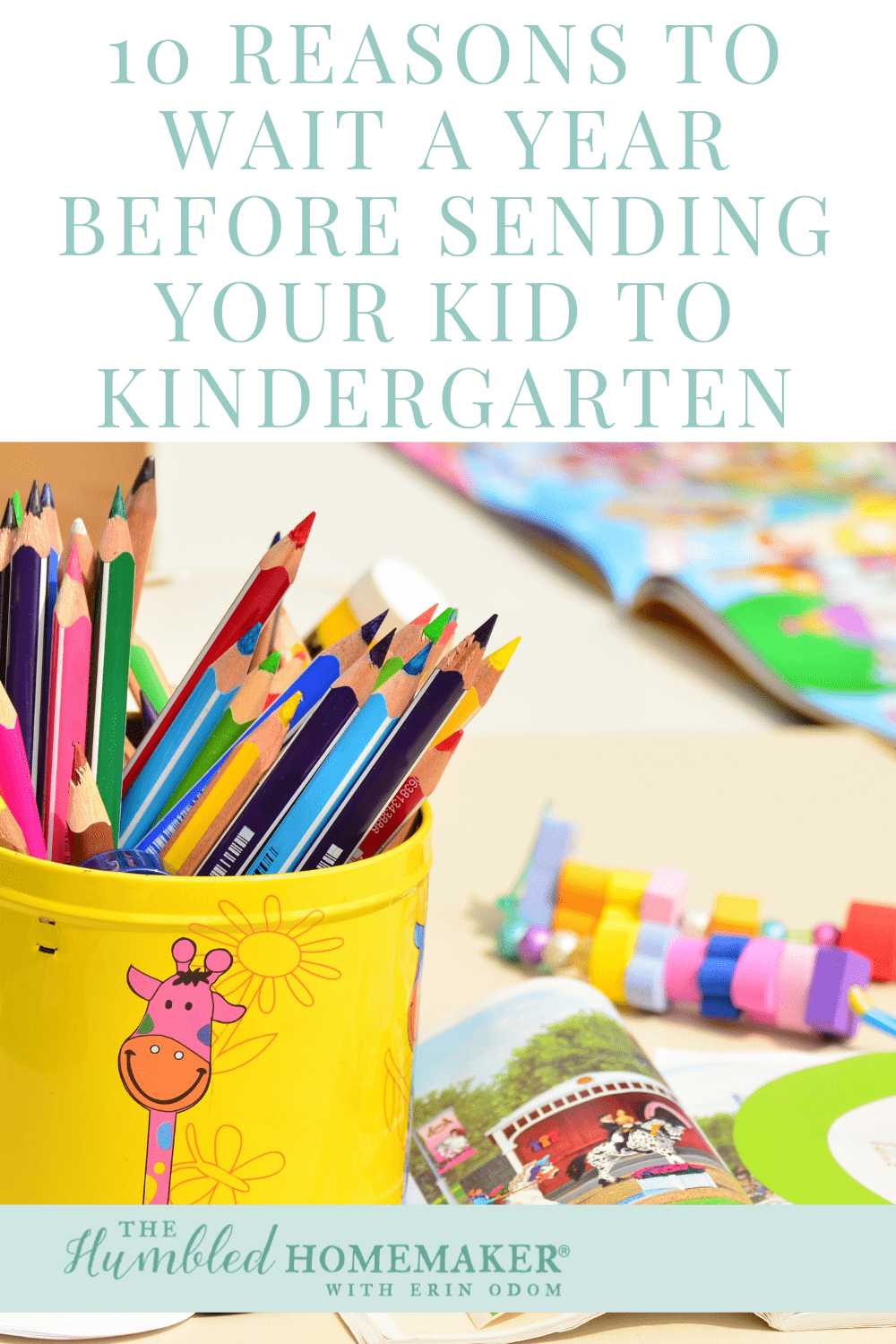 It feels like summer has barely begun, yet around the country–especially in the South, where I live–school is starting very soon!

Our oldest child turned 5 in June, and, according to her birthday, she was supposed to start kindergarten this year.

But she’s not going.

We’re not even starting homeschool kindergarten with her. We’re waiting another full year to start her formal education.

Why in the world would we wait?

Check out these 10 reasons why I’m not sending my 5 year old to kindergarten: 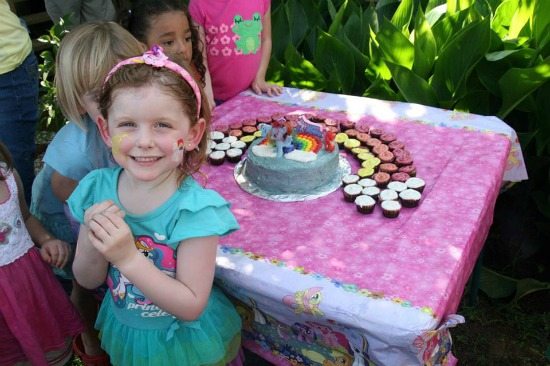 1. She will be one of the older kids in her class.

If she is one of the youngest children, we may risk her falling behind some of her peers–both academically and in maturity as she gets older. I have had others tell me that the difference in age wasn’t that visible in kindergarten but could be detected more as their children got older–especially in the middle and high school years as everyone is going through puberty and getting their drivers’ licenses.

If she is one of the oldest children in her class, she will be driving her friends around once she hits 16–and not vice versa.

2. I would rather her be a young 6 than a young 5 when she starts kindergarten.

I have a fall birthday (November), and my husband (a June birthday) completed kindergarten the year he was 6. So, we were both some of the oldest children in our classes and spent kindergarten during our 7th years of life. We both also thrived academically throughout the rest of our schooling.

Because we both started kindergarten at age 6, we want our children to experience the same.

I have not read any of her writings yet, but supposedly the popular homeschooling guru, Charlotte Mason, also advocated starting formal education at age 6. 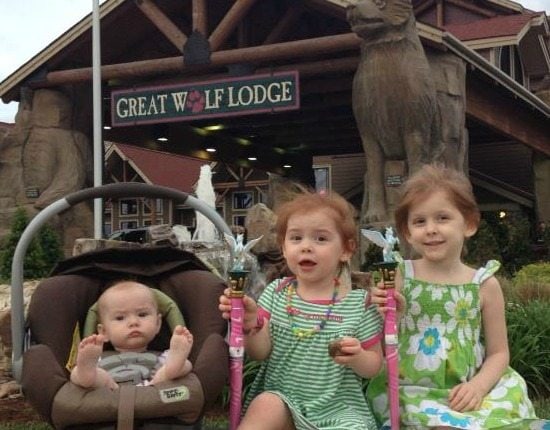 3. I want my oldest daughter and her two little sisters to stay close throughout their childhood.

Our first two daughters are 28 months apart, and our second and third daughters are 22 months apart. Even though the first two are just over two years apart and the second two are just under two years apart, the way their birthdays fall would place the first two three years apart in school and the second two only one year apart in school–if we didn’t “redshirt” both our first and youngest children (which we are already planning on doing with the baby, even though she’s not yet 1!).

Our girls have June, October and August birthdays. Our October baby (our second) will be the only one we do not “redshirt” or wait until she is 6 to send to kindergarten since she will turn 6 early in the school year.

4. For her personality, she will more likely thrive and develop more leadership skills if we wait.

My husband and I spoke with our daughter’s preschool teacher before making the decision to not send her to kindergarten at age 5, and she said repeatedly that she thought our little girl would make it just fine and that was she was one of the “smartest” in her 4-year-old preschool class.

Her teacher also said she would be more likely to be a leader in her class if we waited until she were older. 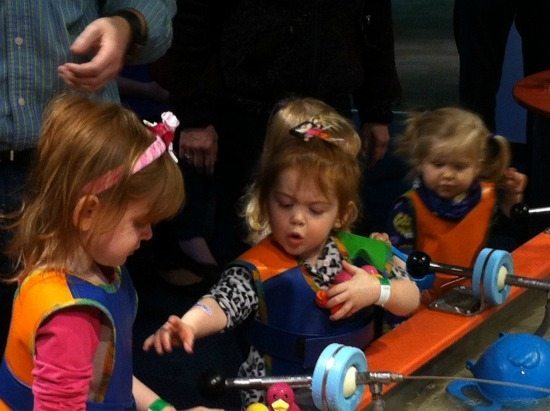 5. Her childhood will last longer.

Who wouldn’t want an extra year of childhood? Our babies grow up much too quickly as it is!

6. She will be older when she starts college.

7. She will be more emotionally mature.

Is our little girl as mature as other kindergarteners? OK, to be honest, I have no earthly idea. But I do know that one day she seems like such a big girl compared to her sisters and the next day she is fussy and whining and even throwing tantrums along with them.

She stopped taking regular naps around age 2 1/2, yet, very occasionally, she will still be tired enough to lie down and take one (she did yesterday!).

I think giving her one more year to mature will do nothing but help the transition from play to formal academics. 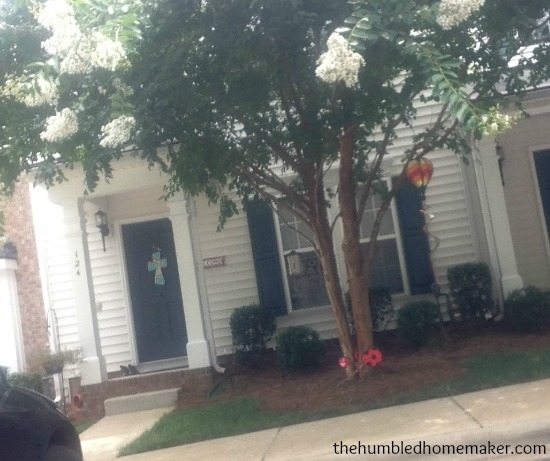 8. We are in a season of transition.

This is huge: We JUST moved–as in we have literally not even been in our new house one week.

Because of the move, we have delayed potty training our 2 1/2 year old, and, by the same token, we think it might be emotionally stressful to add formal schooling into an already shaken-up routine.

9. We want to send our daughter to a Christian hybrid homeschool–and we need the extra year to save money to pay for tuition.

Our town is blessed with an amazing university-model school where students attend classes three days per week and are homeschooled two days per week. Our daughter was accepted into this school for this coming school year, but we could really use one more year to save up for the tuition.

(In fact, one reason I started this blog in the first place was to raise money for our girls to attend this school one day! Every book you purchase or ad you click or affiliate link you buy through adds up to this purpose–thank you!) 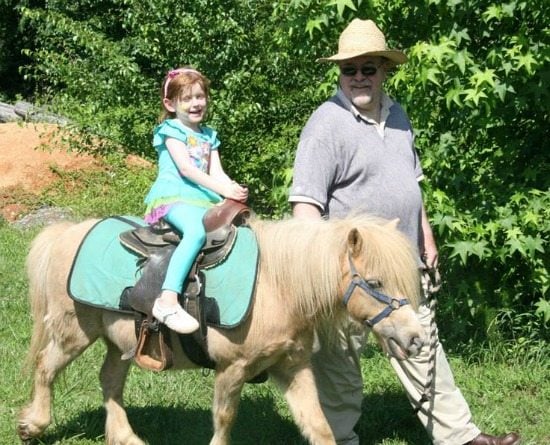 Call me a helicopter mom or whatever you like, but the honest-to-goodness truth is that this mama just “ain’t” ready to send her baby to school. Of course, this reason on its own would have never flown with my husband!

In all seriousness, partial homeschool will take a lot of work, and this current life transition we are in right now is not an ideal time for our daughter to start kindergarten–or for me to teach her.

One of the biggest arguments against people holding their children back from starting kindergarten at age 5 is that those children will get bored in school. My thoughts? If we wait to start her and she ends up excelling to the point of boredom, we can always move her up–but it will be very hard to move her back once she has started school.

Ultimately, we prayed about this decision, and my husband and I both felt a huge peace about this. Once we decided to wait to send her to school, I was flooded with relief! My husband is actually a public school teacher (and I was in the past), so we were also able to make this decision from a professional’s perspective. 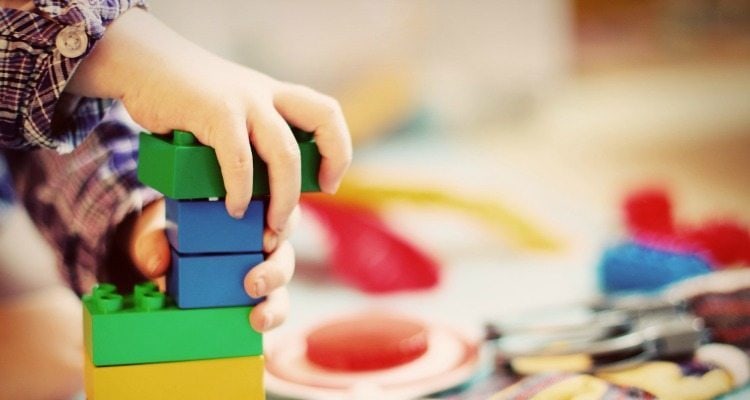 What are we doing in the meantime?

Just because we aren’t beginning formal schooling with our daughter doesn’t mean we aren’t teaching her!

We are sending our little girl to transitional kindergarten three mornings per week at her Christian preschool. We had the option of sending her for five days per week, but I wanted the opportunity to “practice” our homeschool days. In fact, I’m currently working on unpacking our play/school room in the new house!

Does this mean every family with a child who has a summer birthday should wait to send their children to kindergarten?

Absolutely not! I’m a firm believer that parents must make the schooling choices for their families based on their children and their family’s unique needs.

In fact, I fully support my friend Lexie, who is writing today about why she is sending her 4-year-old (who was born the same summer and in the same hospital as my little girl!) to kindergarten (her first day is today!). Click on over to Lexie’s site to read her input on this! (p.s. Lexie is an experienced school teacher by trade; she knows her stuff!)

Should your family consider this?

Only you can make that decision for your family. I hope today’s post–as well as Lexie’s–will give you some food for thought and help you make an informed choice.

Keep in mind that my family had 10 reasons–10!–that led to this decision. Even just one or two reasons may have led us to the opposite choice.

If you’re waiting for kindergarten and looking to teach the basics of the alphabet and godly character during their preschool years, I recommend the curriculum The ABC’s for Godly Boys and Godly Girls! 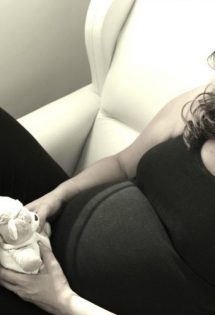 How to Prepare for Breastfeeding

25 Scriptures for When You’re Feeling Overwhelmed 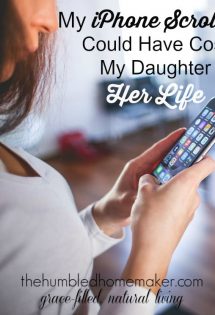 That Time my iPhone Scrolling Could Have Cost My Daughter Her Life
Previous Post What Can You Do with a Food Processor? {Kitchen Tools of the Trade}
Next Post Finding Educational Shows on Netflix for Early Elementary