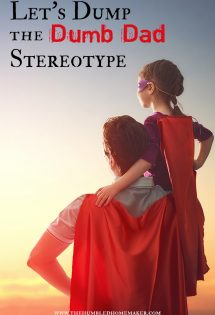 Have you ever noticed the dumb dad stereotype in sitcoms, movies and other TV shows? It’s time that we put a stop to the idea that all dads are bumbling idiots incapable of completing a task. 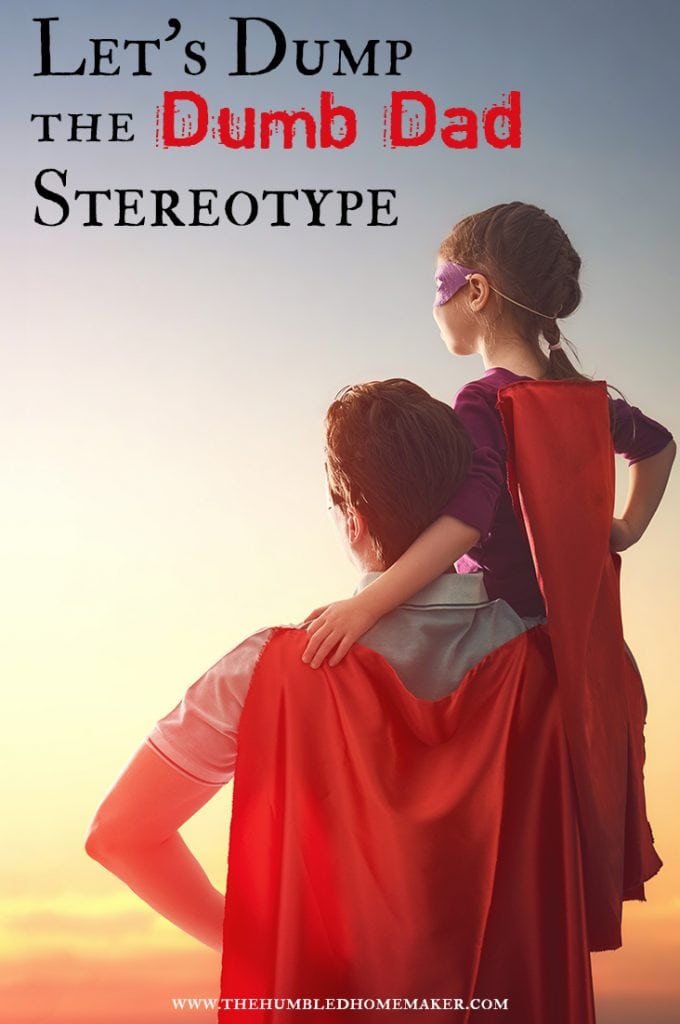 The other day I was sitting in the doctor’s office waiting room while my oldest watched a show on a popular kids’ network.

I wasn’t paying any particular attention to the show, but a couple of things caught my ear, and I was sucked into the show.

I immediately noticed that the “dumb dad stereotype” in the show was portrayed as a bumbling idiot how wasn’t capable of an intelligent thought without help from his sarcastic, disrespectful kids.

He couldn’t take care of his kids and was constantly having trouble completing simple tasks…like taking his kids to the grocery store or fixing lunch or changing a diaper. Come on! Let’s raise the bar a little bit on what makes a good father.

In addition, his loving, sweet (and at times, condescending) wife fixed everything and solved all the problem while the kids just rolled their eyes. Granted, my wife is loving and sweet, but we are a team.

And this is not a new phenomenon. Now as an adult, I think about the sitcoms from my childhood and some of them were the same way. The “dumb dad stereotype” was always getting into a mess that the wife or kids had to get him out of. Even the cartoons took on this persona…think The Flintstones and The Jetsons. As a child I didn’t notice it, but as an adult, I certainly do.

My wife and I don’t really watch sitcoms, but I have also noticed that trend on adult shows as well.

One friend noted, “The show was one of many shows depicting children as teachers of parents more often than vice versa. And dads especially being the people who are lectured and ‘schooled’ by everyone else who apparently know better than dad. If the child only sees examples of child superiority, what does that mean for the child’s future? We all grow into adults. So the male child has nothing to aspire to, because dads are fools.”

I know this is meant to be comedy, and yes, there are times when I laugh at the exaggerated situations. Yes, we can laugh and have fun, but that “dumb dad stereotype” is not the norm…at least in my world he’s not.

The Dumb Dad Stereotype is NOT the Norm 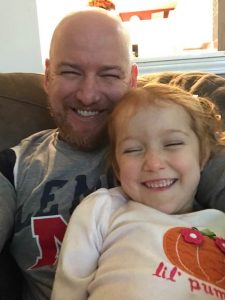 On some level this constant portrayal of dads as weak, bumbling idiots is bothersome to me.

Fatherhood.gov says that the children of fathers who are involved are more likely to:

However, while this site aims to strengthen parents and show them as competent, our media culture says the exact opposite.

Is this really what we think of dads? Is that really our culture’s perception of fathers?

An unofficial Father’s Day survey done by TODAY found that almost two-thirds of the men who answered the poll feel that society does not respect dads enough for their contribution to their family.

As a man, I spend a lot of time around other dads, and I have to be honest. I don’t know a single dad who personifies the clueless patriarchal figure that the pop-culture media presents to us.

Most of my friends are transparent about their struggles as a parent and husband, but these men are guys who love their wives and kids. They are involved on multiple levels in their homes. They care about their families more than themselves.

They are leaders in their homes how continually seek wisdom on how to be the best dad and husband they can be. They are invested in all aspects of family life.

I know other dads are out there. The ones who are clueless, abusive, disgusting, unintelligent, detached, or incapable. However, it has been my experience that those dads are the minority. Perhaps they seem like the majority because they are the loudest and most obnoxious.

Being a Dad Is Rewarding But Not Easy

From the things I’ve read and the conversations that I’ve had, many men struggle with the twists and turns of family, work, and life in general. They have made sacrifices for their families to provide for them, and many make equal sacrifices in their professions to be there for their families. 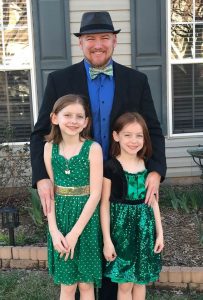 A report by The New Dad states that when Millennial men become fathers, there are a few clear trends. Millennial fathers’ satisfaction with their jobs and their lives is significantly greater than that of their childless counterparts.
Source

More than 70 percent of dads say they struggle to find a good work-life balance, a number that is unsurprising in light of the fact that more than half of the dads surveyed indicated that they do not feel they receive enough support from their employers in their role as a father.
Source

Dads also agree that when they are spending time with their children, they do not consider it “babysitting.” Nearly 90 percent of the dads who took the survey agree that they are fathers, not child care providers, while nearly 60 percent of dads say that they have had an outsider commend them for “babysitting” their kids while on solo outings.
Source

Men, as dads and husbands, are more involved than they ever have been before. They don’t expect their wives to do it all. They cook, clean, change diapers, and split other duties.

Fathers don’t expect to be rewarded for what they should be doing. It’s their dad duty, but I think they would like to be acknowledge and respected for their contributions.

While two-thirds of dads said they feel respected by their mates for their parenting role, nearly 70 percent of moms agree that Dad deserves more respect on Father’s Day and every day. Our culture’s portrayal of dads is anything but respectful.
Source 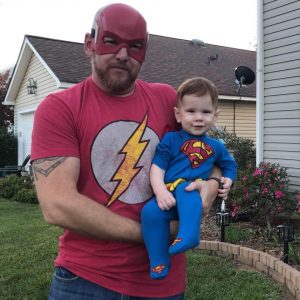 Dads long to be the heroes for their kids, and the warriors for their wives. Yet our culture often portrays the opposite. The dad who always needs saving or who is the joke of the family. He is constantly being run over by the mom and kids and couldn’t fight his way out of a wet paper bag.

Are we perfect? No, we are not.

Do we make mistakes? Yes, we do.

Are we idiots incapable of caring for our children or loving our wives? Absolutely NOT!

Most of us are trying our best. We, as men, dads and husbands, are constantly growing and changing to improve who we are.

So, really I just ask one thing…

Well, that was more than one thing, but you get the point.

If you’ve ever had The Five Love Languages, you know that men receive love different ways. Find out how your man receives love and respect then fill up his tank.

For example, if he’s a words guy, tell him how attractive he is, affirm his ability care for his family, praise him for spending time with the kids, etc.

Spend time with. Get him a small gift of appreciation. Let him know that you care. 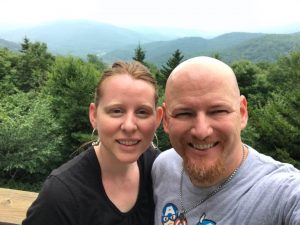 One of the things that my wife and I enjoy doing after the kids are in the bed is cuddling on the couch and watching a show or movie together.

She tolerates my shows like Flash or Grimm, but we have also found shows that we both enjoy, like Downton Abbey and Once Upon a Time.

If you watch a show, find something you both can agree on that doesn’t enforce the dumb dad stereotype.

If you enjoy the outdoors, go on a bike ride or a hike…just the two of you.

Give him a chance to be a good dad.

If you are always hovering over him and not giving him any room to breathe with the kids, he can quickly become frustrated.

He may need a few specific suggestions since some dads don’t have this innate fatherly instinct.Let him take them places. Suggest he take them to a movie or for ice cream or to the park.

You go somewhere and leave him home with the kids…without calling every 5 minutes to check in on him.

If he has to make a hard choice, support him in his decision. This could including anything from a professional decision to disciplining the children.

You should both reinforce each other, so that the kids don’t get mixed messages.

If there is an issue, then wait until the appropriate time to discuss it with him. There may be times where you may need to step in and say, “Honey, can I talk to you for a second?” and then go into another room away from the children.

My wife and I may do the same task but tackle it different ways. If she doesn’t something and I don’t like the way she does it, I try really hard not to go behind her and fix it.

You should do the same for your husband. If he doesn’t fold the laundry or feed the kids you way you want it done, let him do it his way and don’t go behind him trying to fix.

If you do, he will most likely not see the point in doing the task to begin with. If there is an issue that needs to be addressed, then talk to him about it at the appropriate time.

Pray for and with Him

Prayer is a powerful tool.

Pray specifically for him as a father and as a husband. Find scripture to pray over him.

Instead of nagging him about something, give him space and pray about the issue.

If you need some suggestions, check The Power of a Praying Wife.

Again, I don’t know any dads who fit the stereotypical figure put out by Hollywood, so let’s move past these cliches and notice who the real dads are.

Where have you noticed the “dumb dad stereotype”? How can we combat this?

With Father’s Day around the corner, you can check out my gifts ideas from man to man: 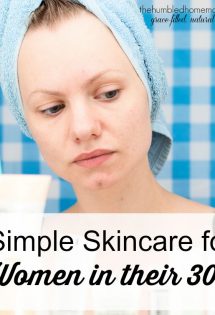 Simple Skincare for Women in their 30s 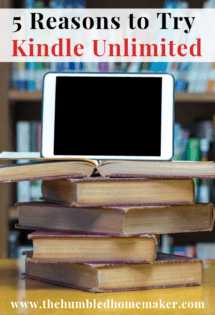 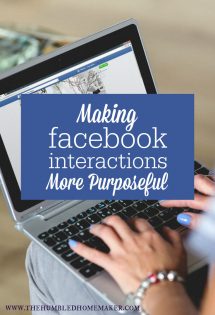