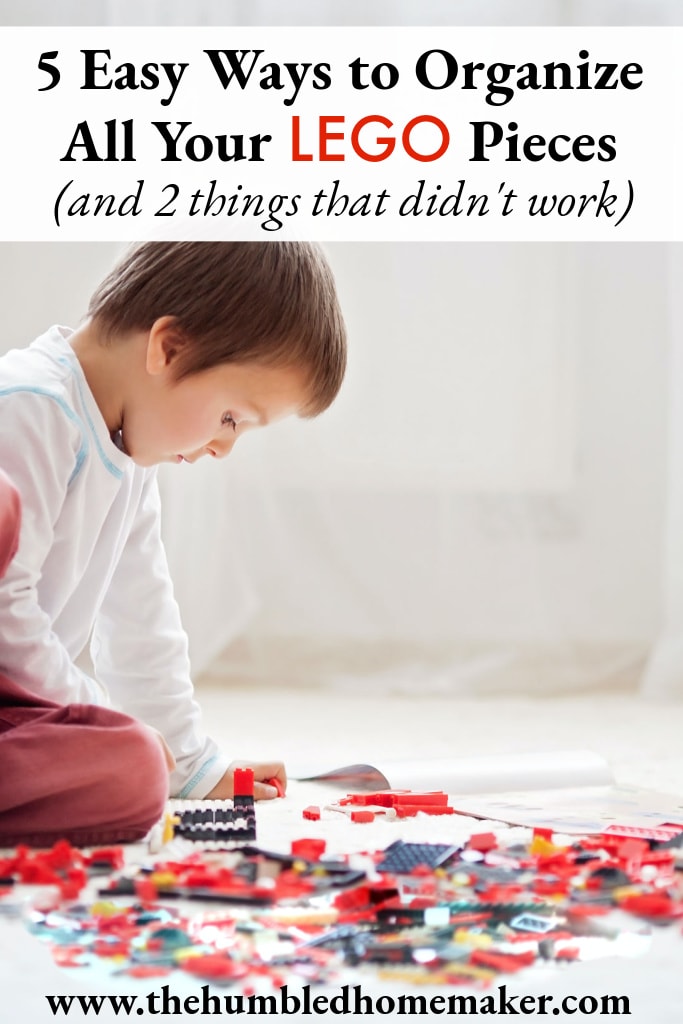 Fun fact: According to LEGO® , a “brick” is the basic building block of LEGO® . If you are talking about more than one LEGO® brick, the plural term is LEGO®, not the word “legos” that many people use. (Get an extra 15% off on Zulily!)

For anyone who has ever stepped on a LEGO piece, you know how important it is to get them off the floor and into a safe place.

The problem is often the question of “How?” How do I organize the LEGO pieces? How do I make them accessible to the kids while keeping them picked up? How can I find the easiest ways to organize LEGO sets? 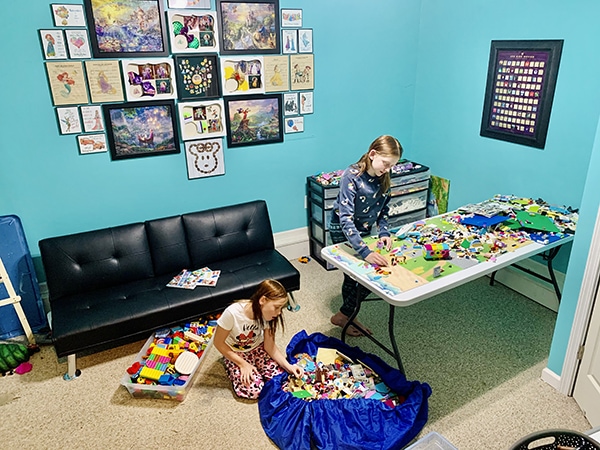 Our kids absolutely love LEGO (on Amazon or Walmart), and we have sets that stretch from Disney princess to Star Wars and everything in between ranging in difficulty from DUPLO blocks to LEGO Architecture. If you name a category, we probably have at least one set from that category. They have received many of them as gifts, but they have also bought many of them with their own money that they have saved up.

The building blocks provide hours of creative play and enjoyment. Our kids and their friends will literally spend hours in the playroom building with their LEGO pieces

If your child or grandchild is between the ages of 5 and 10 (and actually my 4 year old and 12 year old love this magazine), you can get them a FREE subscription to the LEGO Life Magazine (even shipping is free)!

My kids love getting mail, and this is one of their favorite things to get. They enjoy the puzzles, comics, pictures, etc…just all of it. They are huge LEGO fans (as you can see below). They keep the magazines and reread them for months.

Get it for your kids (or grandkids or any kid) today! 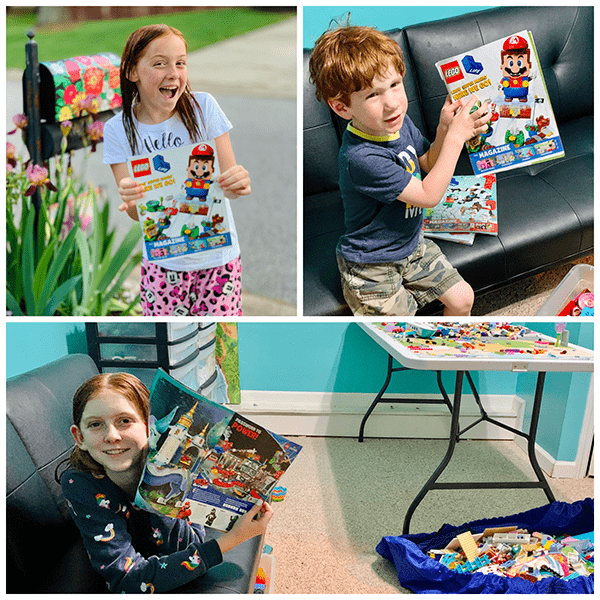 P.S. If your kid loves LEGOs, they will love this FREE Lego Life Magazine, and it really is free. You don’t pay shipping or anything.

Over the years, we have tried many different methods of organizing and storing all the pieces and manuals. Some of them started small and evolved into larger methods. Some of them were abandoned all together because they just didn’t seem to work well for our kids.

Organizing and storing LEGO (on Amazon) can be a challenge. The sheer number of pieces with all the different sizes and shapes can be overwhelming.

But…There are definitely some advantages to finding a system that works for you and your kids: 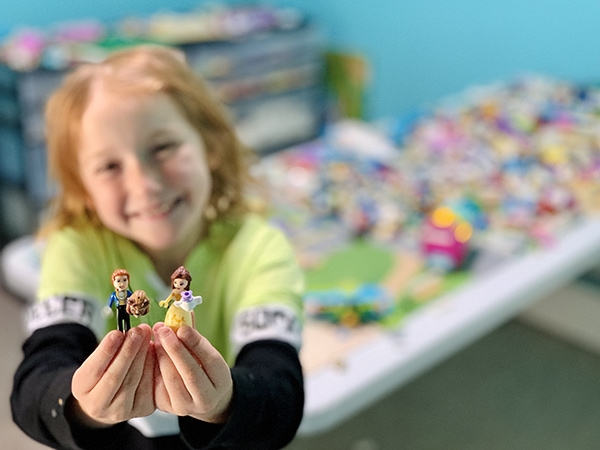 Tips to Control the Madness

In addition, kids aren’t usually known for being the most organized people on the planet, and they are more concerned with having fun and building epic structures than putting a block back in the right place. (I mean…who wouldn’t be.)

However, with 4 kids and numerous LEGO (on Amazon or Walmart) structures in varying degrees of construction, we needed some way to keep things under control. At some point, though, there is going to be a big pile of mixed up pieces that have been thrown down or dropped.

Check out this cool brick and small toy cleanup system that encourage kids to clean up all those little pieces! 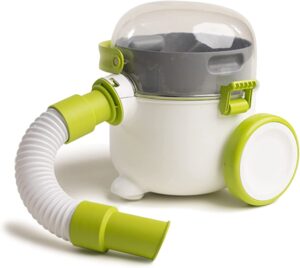 As such, there are a few tips to help with this. We aren’t after perfection here. We want to encourage creativity and want the kids to have fun and enjoy their play without worrying about where things go every second. Although, we also want them to be responsible and clean up after themselves. It’s a balancing act at times. 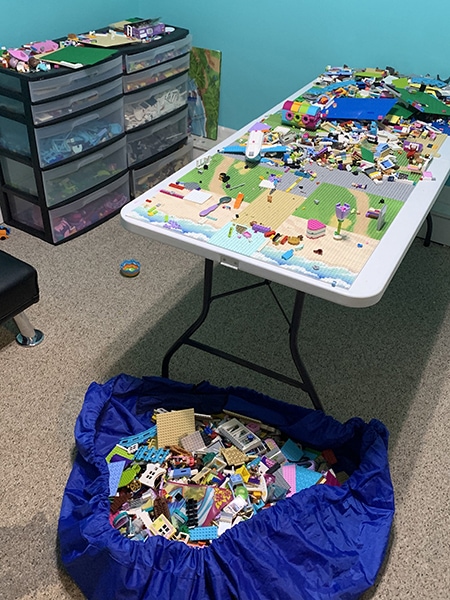 There are any number of ways to organize LEGO (on Amazon or Walmart) sets, so here are few that we have used that have worked for us at some point over the years of amassing our LEGO fortune. 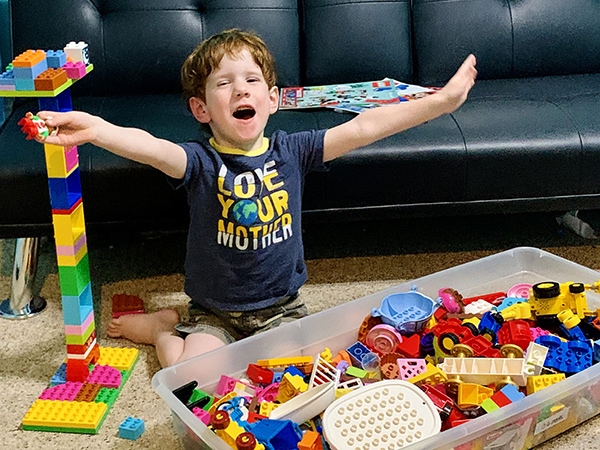 We tend to organize our LEGO by color, except the DUPLO blocks. The simplest and often easiest storage solutions using plastic bins of varying sizes. I prefer to use clear ones (at Walmart) so that you can see what’s inside as opposed to the solid color ones. It’s also better to use smaller ones so that kids can manage them on their own. LEGO sets can get heavy if too many are put into one box. They are great to stack or slide under the bed or couch when not in use.

We don’t organize the DUPLO blocks because that doesn’t work for our 4 year old. They are just in one big bin, and he digs through and pulls out what he wants. Although, the bin is easily pushed back and stored under the little futon (ours came from Walmart) when not in use. 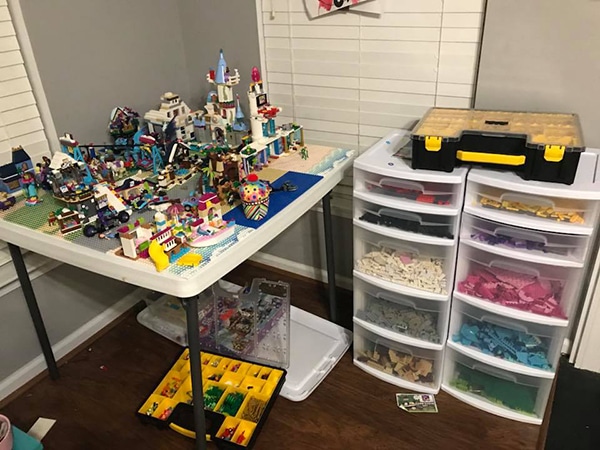 These plastic drawers have by far been some of our better options for organizing by color, but they would also work for organizing by piece size or some other system.. We usually get ours at Walmart (nice being able to order online and pick up). These carts with colorful drawers are also fun and useful for storage and organization. I love that they come in all shapes and sizes and that some even come with wheels so that they can be easily moved around. I typically used the ones with the small and large drawers in the same set to give different options. We started with the smaller ones, and as the kids added sets, we switched to the bigger ones. If your OCD really kicks in, you could even use a label maker. 😄 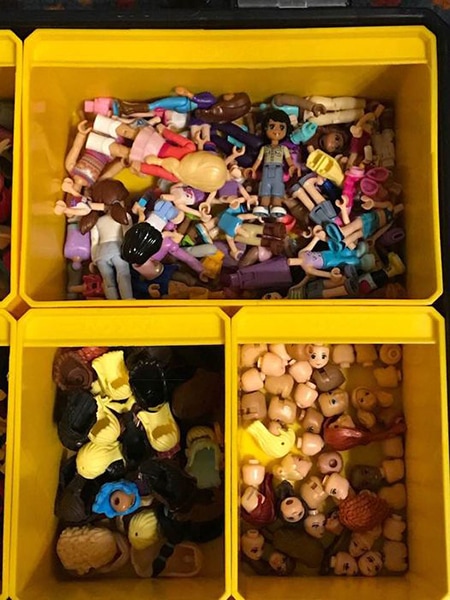 The storage organizer boxes with removable bins were also some of the best options that we found for smaller pieces. There are a variety of plastic boxes with trays or compartments. We used these for minifigures, their accessories, and other small parts that would get lost in bigger drawers and bins. They were so convenient and easy to stack or store away on a shelf or under a bed. These hardware cabinets with plastic trays could also work well in some situations where it was anchored and couldn’t fall over. 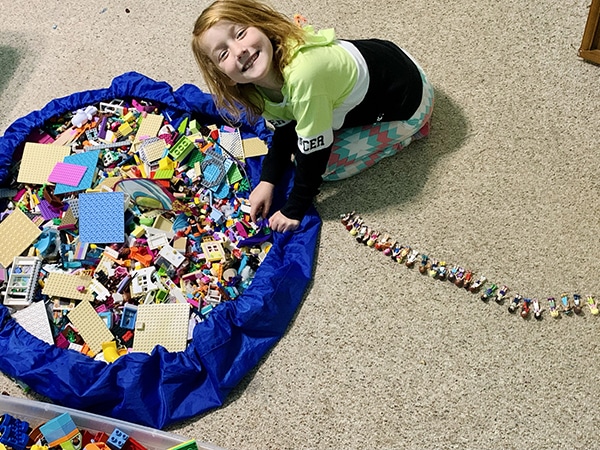 For the longest time, we just used plastic storage bins for pieces that weren’t organized or had been dropped on the floor. At times, it made it hard to spread them out without dumping the entire box out again, so when I found this storage bag, it made it easy for them to spread out the pieces and then just close up the bag when done and store it away. Even since we purchased this one, they have come out with others that zip into a storage basket (with great reviews) to make things even simpler. This was one of the better purchases we made for ways to organize LEGO pieces that needed to sorted but were still being played with. 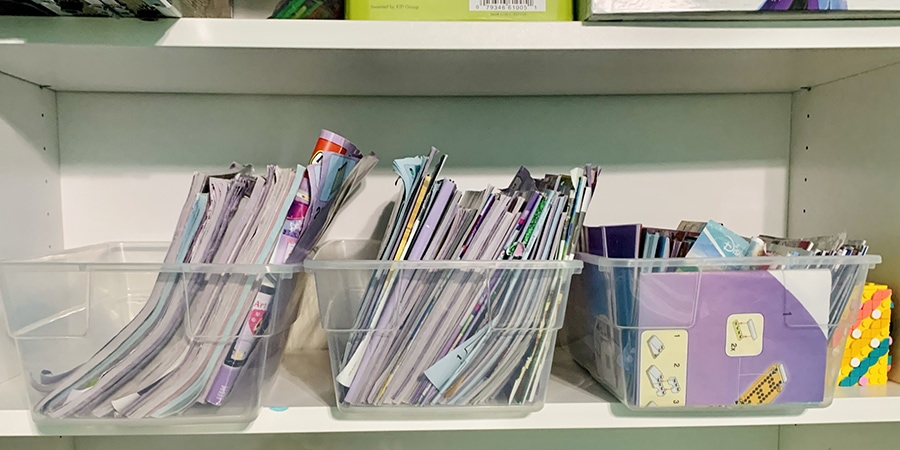 One of the most difficult things to store and organize are all the instruction manuals. Granted, you can just download a pdf of them, but the kids prefer the manuals (and that also means I don’t have to print anything out). We’ve also had different methods of storing all the little booklets as well. 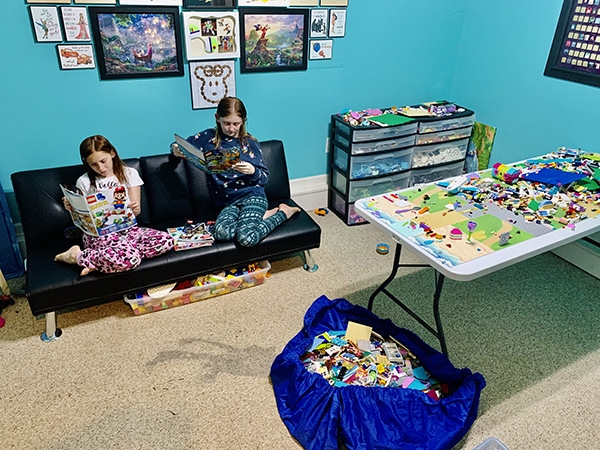 As I mentioned, we tried so many methods and ways to organize LEGO (on Amazon or Walmart) sets. We just found things that work for us and our kids. In the process, we did find a few things that didn’t work for us, but they may work for your kids.

It did not work for us to store their LEGO by sets. I’ve seen where some people try to put all the pieces to a set with the manual inside a plastic bag and store it that way. However, this was a definite no-go for our kids.

They love building the sets with the instructions, and they will play with that set for hours on end. At some point, though, the set will probably get broken (usually by Hurricane Little Brother) or come apart.

Occasionally, they will repair it or ask me to help rebuild. However, most of the time, instead of rebuilding it, they use the pieces to make their own creations. They have done inventive creations from their own imaginations (like towns where they even “buy” and “sell” goods like clothes, etc.). The’ve also done recreations of places they’ve visited (like Disney World and the zoo).

If we stored them by set, that would limit their creativity, so this was one of the ways to organize LEGO that just did not work for us.

Another thing that didn’t work for us (but does seem to work for some people) were the premade dedicated construction tables. While these tables are cute and may seem like a good idea at first, they just weren’t big enough for us nor did they have enough storage.

But you may be saying, “You have a table in your picture.” And you would be correct, but we made a table that worked for our needs.

As you can see, there are numerous ways to organize LEGO (on Amazon or Walmart) sets. This is just what has worked for our family. Really, you have to decide what’s best for your kids and your situation and make it work. 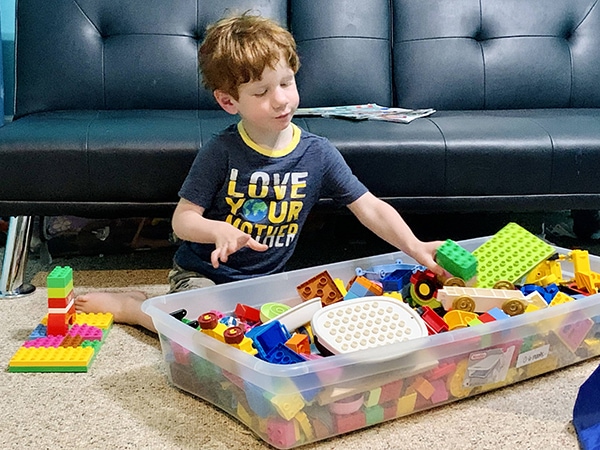 Have you found any ways to organize LEGO pieces that works for you? Share your experiences in the comments. 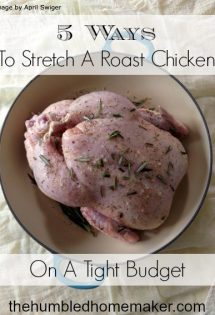 5 Ways to Stretch a Roast Chicken 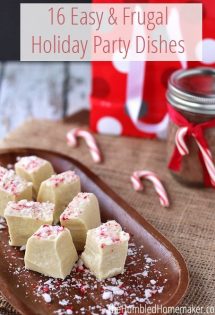 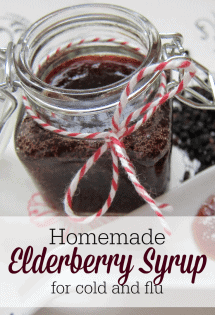