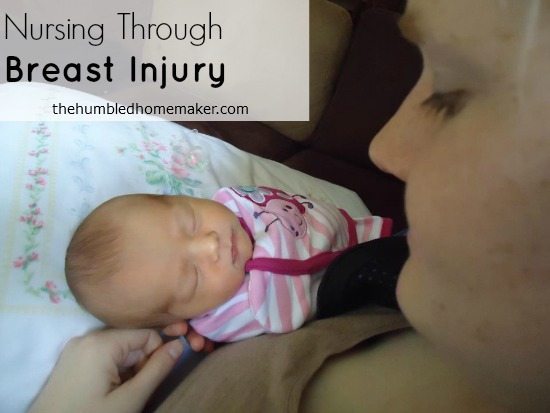 This post is part of the Breast-Kept Secrets: Breastfeeding Advice from One Mom to Another series. Go back and read all posts here.

Note: This post will be fairly subjective. It reflects my experiences with a breastfeeding issue on which I could find little to no information.

When my daughter Maggie was born we went through some of the more common nursing problems, such as difficulty latching. But together we persevered and by the time she was one or two months old, we had a pretty good thing going. I thought breastfeeding would be more or less smooth sailing from there on out. As it turns out, I was wrong.

Maggie was around four months old when we were in a car accident. She and I were both riding in the backseat, and at the time my primary concern was to make sure she was okay. Thankfully, she came out unscathed. I thought I was fine too, other than having had the wind knocked out of me.

Then over the course of the next day or two, one of my breasts began to bruise. It became very hard and painful, and three quarters of it turned black and blue! Maggie fussed when she had to nurse on that side and began latching improperly again.

I figured that since the internet is the source of all knowledge, I’d see if there was any information available online about nursing through a breast injury. I couldn’t turn up anything relevant to my specific situation! There were tips for dealing with nipple injuries or nursing after breast reduction, but nothing to help out a mama who’d had one of her breasts crushed by a seat belt.

I came to this decision by reasoning that if she nursed less than usual from my injured side, I’d end up with engorgement on top of the bruising and dead tissue I was already dealing with.

So at every feeding, I put Maggie to the injured breast first. If she grew fussy after a short while, I’d coax her to stay on as long as possible. If she became frustrated, I’d switch her to the other side but put her back to my damaged breast at the end of the feeding. 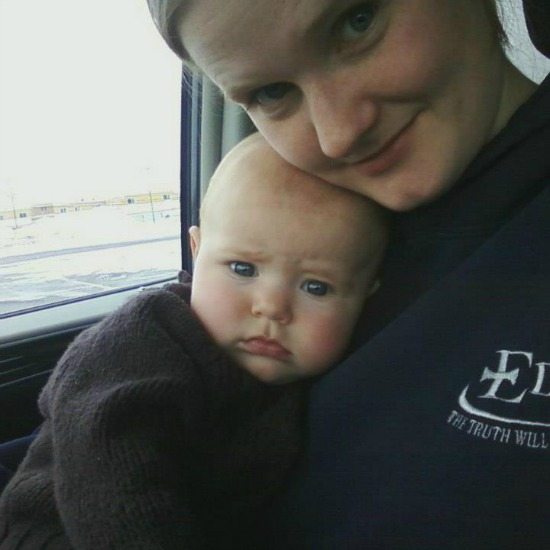 Gradually, we adjusted. The bruising subsided, probably a half to two thirds of my breast tissue returned to normal, and Maggie began to nurse on both sides without complaint. I was, however, left with several large lumps in my breast.

Just to be on the safe side, I went to my obstetrician who suggested they were most likely galactoceles. She sent me for a breast ultrasound where that diagnosis was confirmed. I was unsurprised as a galactocele is essentially a cyst filled with milk, caused by blocked milk ducts. I would imagine I have more than a few blocked ducts!

While galactoceles can resolve spontaneously, mine have not. However, Maggie is only a year old and hasn’t been weaned yet. I’ve found a few sources which suggest galactoceles may be reabsorbed by the body when nursing stops. I’ve also read that they may reoccur during any other periods of lactation. Whatever the case may be in my situation, I’m very thankful I was able to continue nursing through my breast injury and was able to keep my supply up.

In retrospect, there are a few things I might have done additionally to make things more comfortable for myself and Maggie. For those of you who may be dealing with a similar situation, I will lay things out as clearly as possible.

My Experiences Nursing Through Breast Injury

As you can see, my primary focus in nursing through a breast injury was on maintaining milk supply rather than treating the actual injury itself. I certainly have no regrets as to the decisions I made, but do occasionally wonder if I might have seen a reduction in the number of lumps that formed had I chosen to treat the injury at the time.

While it can be painful and frustrating to continue nursing through injury, it can be done.

Once milk quality has been ensured, I strongly recommend nursing after injury in order to avoid additional engorgement and to maintain production. Remember too, that while it’s important to look after baby, you must take care of yourself as well. Any troubling side effects, especially the formation of breast lumps, should be examined by a doctor.

Have you ever nursed a baby through breast injury? What advice do you have for mothers in a similar situation? 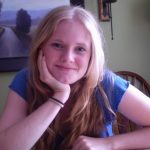 Laura Weymouth is a stay at home mom living in upstate New York with her hilarious husband and adorable daughter. When not puttering in the kitchen with her sleeves rolled up, you can find her at the local library looking for her next favorite book or working on a novel of her own. She blogs about a little bit of everything at The Merry Mennonite. 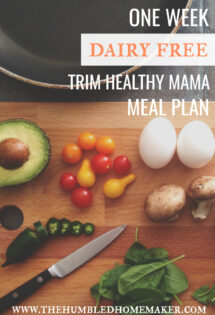 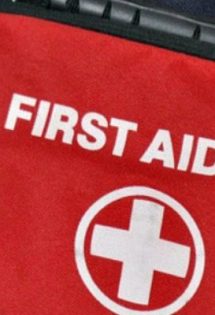 How to Make an Herbal Travel Kit: Natural First Aid on the Go! 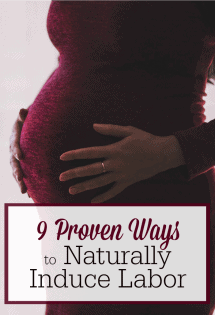 9 More Ways to Naturally Induce Labor {part 3 of my 3rd baby’s birth}
Previous Post How to Make Packed Lunches Eco-Friendly {Mighty Nest Review}
Next Post Is a High Speed Blender Worth It? {Kitchen Tools of the Trade}