Reading Time: 3 minutes
Pen poised to paper…I sat in the hard, wooden desk and wrote. Anything and nothing…and soon it became everything to me.
Freewriting. She instructed us to liberally write whatever came to mind. It didn’t matter if we wrote about our worst wounds or the smudged stain on the carpet. As long as we wrote. For we were becoming writers.
And I wrote. Back before the days of ipad tablets or even laptops in every college classroom, I gripped my blue Bic pen until my fingers cramped.
And what started with: “I don’t know what to write. It’s a beautiful spring day outside, and shouldn’t I be enjoying it?” turned into a record of my purest passions, my deepest pains, my most vivid childhood memories and what bothered me the most about this rotting-away world.
And unlike many college professors who stood aloof at the front of their rooms as they worked on dissertations of their own, she paced the floors and looked over our shoulders–curious to know more of our scribbles, eager to lend a word of encouragement and passionately wanting to see us wield those jotted words into masterpieces of prose.

And my 21-year-old ears tuned to her ever-present wisdom. She–she who stood short in stature but strong in character. She who balanced friendly teacher with fierce constructive criticism. She who embodied both seriousness and humor, femininity and security.
Truth be told, she frightened me a bit. But it was a fright wrought with the deepest respect and admiration.
Long before the late-night feedings that painted dark circles under my eyes and two and a half pregnancies etched evidence on my belly, she help shape me.
So instead of “telling” the memories from my Grandpa Amos’s farm, I showed the winding drive and the musty cellar that we hovered in during springtime storms.

And with strong action verbs, I lamented the travesties of Christian college students addicted to pornography.


And when, six weeks ago, I heard of her cancer, I wept.
Ovarian.
Perhaps she would make it. Perhaps she would pull through–as my Mama had.
In her last days I prayed, and I thought back to the class where I sat, pen poised to paper and wrote of my Mama. I wrote of the ugliness of cancer. And I wrote of the beauty of what God taught me through that trial.

And when Dr. Price passed a few weeks ago, I cried for her family, for her friends, for her co-workers and even for her current students. Up until very close to her death, she continued to teach future writers at Gardner-Webb University.

I thanked God for my short time with her. Ten years ago exactly.
One spring semester.
She took a tiny spark that began in me before I could even read and fanned it into a fiery passion.
If it weren’t for her, I may not be the writer I am today.
This blog would not be.
And, for her, I am eternally grateful.
*This column first appeared in the April 6 issue of The Mooresville Weekly.
Join The Humbled Homemaker on Facebook or subscribe below to not miss a post! 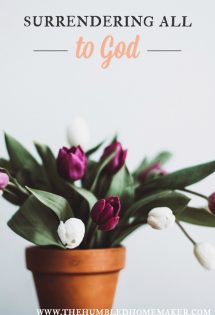 Surrendering All to God…Because Pain Has a Purpose

When Sickness Keeps You Home 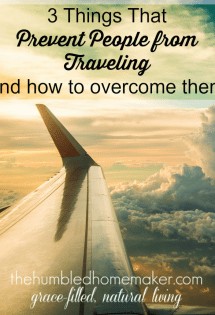 3 Things That Prevent People From Traveling {and How to Overcome Them}
Previous Post A Tale of Two Births: Medicated vs. Natural Hospital Births, Part 2
Next Post Easy Homemade Liquid Dish Soap